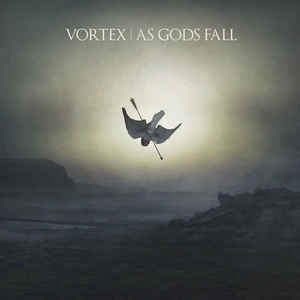 Background/Info: Marcus Stiglegger is celebrating the 10th anniversary of his sonic brainchild Vortex with a new album. “As Gods Fall” also is the final chapter of the trilogy about mythology. It all started in 2013 with “Kali Yuga” and “Moloch” came next in 2015.

Content: This work reveals 9 new cuts, 8 remixes and 2 unknown cuts. The sound of this work is dominated by an offspring between dark-ambient atmospheres and ritual passages. There’s a perfect harmony between both sources of inspiration, but especially the ritual input accentuated by spoken-like and haunting vocals is one of the main elements of the album. Heavy sound blasts have been merged together with drones and other slow resonating percussion parts.

+ + + : I liked previous Vortex-releases, but this album is definitely my favorite one. It’s a bit of a referential work revealing the growing maturity of the project, but still a great, explicit ritual touch. The drones and haunting voices are leading the listener into a state of fear. Heavy sound blasts and bombastic, orchestral arrangements are simply brilliant. This album is the result of a truly creative process accomplished with patience, knowledge and talent. Among the remixes I noticed a few cool edits, but I especially want to mention the outstanding work done by Operation Cleansweep. This version will lead you into the last stadium of angst and panic… I also have to mention great edits by Apoptose and Bergemann. Vortex also features a great new cut. Notice by the way the remixes bring us back to earlier Vortex work.

Conclusion: “As Gods Fall” shows Vortex at its best, but it also is an album I would consider as one of the most noticeable ones in its genre for the past few months.