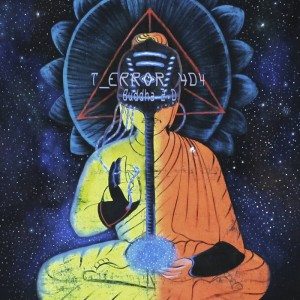 Background/Info: T_Error 404 is probably a name, which doesn’t really say that much worldwide. Behind this Russian solo-project is hiding ‘Denoizer’ (Vladimir Cherepanov) who’s already been active composing music under the T_Error 404 moniker for a couple of years now. I got the opportunity to discover this artist by some of his digital productions released on the Russian digital labels X-Line and Absetzer where he seemed to have been involved with. After a hiatus of several years T_Error 404 strikes back with an album featuring 30 (!) tracks, which will take you away for a sonic trip of more than 3 hours.

Content: I remember T_Error 404 for its electro-industrial work. “Budha 2.0” is more into modernism and high-tech compositions. When you release an album of 30 tracks I think it’s better and even suitable to make it a bit diversified. That’s precisely what this album is all about.

The tracks move from industrial-body music to rhythmic electro-ambient to pure trance structures to body-techno. It’s a sophisticated and elaborated piece of work with a real care for outstanding sound treatments. That’s for sure the main characteristic of this work! The compositions have been achieved with a real fine taste for impressive sound sculptures and overwhelming atmospheres.

Several tracks have been completed by alluring, spooky vocals. The production here again is all made of subtle elements. The vocals are not into classical heavy screaming and distorted effects, but it all sounds like an evil force contributed to the album by appropriated vocals. You also will notice multiple Russian samplings instead of real vocals.

This album features multiple high-danceable cuts, but there are also passages to dream away. The common element between all of the songs remains the sound knowledge of Denoizer.

+ + + : T_Error 404 has literally reinvented his sound! The result is a brilliant and creative exposure of what great electro-underground music can be. The main influence seems to be techno-minded, but it has been masterly mixed with dark-electronics, EBM and ambient music. I’m also deeply impressed by the great production of the vocals. It’s a damned great ghost-like effect, which is totally fitting to the work. There are many outstanding cuts on this album.

– – – : The only minus point for sure is the length of this album! Even if I consider “Budha 2.0” as a real essential piece of music, 30 songs is a bit too much and especially demanding.

Conclusion: If you’re in search of a new electro-underground guru, just give T_Error 404 a chance. This is album is absolutely phenomenal!