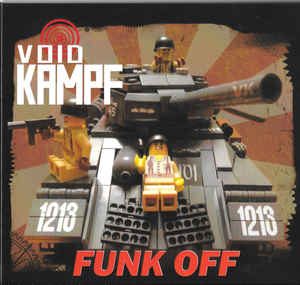 Background/Info: Set up in 1999, French EBM formation Void Kampf self-released a few productions before joining hands with the now gone Sigsaly Transmission to release their debut CD-album “Severe Mais Juste” (2010). Void Kampf featuring a few ‘famous’ members already active for years at the EBM scene from the Northern part of France is now back on track unleashing a new opus.

On top of the production you’ll notice harsh vocals mainly sung in French and English. Notice by the way several guest singers contributed to the work.

+ + + : I expected pure old-school EBM, but “Funk Off” is much better and more original. Void Kampf added a very own touch, which makes it more diversified and open-minded although always driven by a solid EBM basis. The cover version of “The Calling” is a risky business, but I simply enjoy this version, which is recognizable by its cool tune, but there’s a nice twist between male vocals and sexy backings. And there’s sexier stuff featured, which also makes the characteristic of the work. I also like the funny ‘Playmobil’-like front cover.

– – – : Void Kamp is not reinventing EBM, but the diversity of the production creates a refreshing touch. The only and single regret is the global production/mastering, which could have been better. The sound now remains pretty rough and unpolished, which is maybe intentional, but less professional compared to high tech productions in the genre.

Conclusion: Void Kamp is alive and they sound like having pure fun. This is the kind of work that will appeal for die-hard EBM fans.

Since you’re here … … we have a small favour to ask. More people are reading Side-Line Magazine than ever but advertising revenues across the media are falling fast. And unlike many news organisations, we haven’t put up a paywall – we want to keep our journalism as open as we can. So you can see why we need to ask for your help. Side-Line’s independent journalism takes a lot of time, money and hard work to produce. But we do it because we want to push the artists we like and who are equally fighting to survive. If everyone who reads our reporting, who likes it, helps fund it, our future would be much more secure. For as little as 5 US$, you can support Side-Line Magazine – and it only takes a minute. Thank you. The donations are safely powered by Paypal.
Tags: EBM, Void Kampf