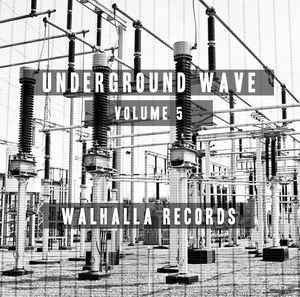 Background/Info: The Belgian Walhalla Records was set up as an independent record label, which mainly wants to bring back the good-old cassette scene from the 80s. This compilation series is an interesting concept bringing old, forgotten and often unknown bands from the 80s decade back to life. This vinyl features 12 bands, mainly from Belgium, but there’re a few exceptions to the rule.

Content: This sampler is more than simply a selection of mainly Belgian music projects active during the 80s electro-underground period. “Underground Wave”-series brings an impressive list of forgotten and unknown bands back to life and sometimes for the very first time on vinyl. Back in time we all knew local bands, which were doing rehearsals in dark cellars and wet garages. Most of them never gained any recognition although they sometimes deal with interesting sounds.

That’s precisely what I experience when listening to this album, which features an info sheet about all the bands. It also is an opportunity to get back to the typical early 80s electro experiments mixing elements of new-wave and experimental music. Today it sounds pretty minimal, but back in time it definitely was a ‘hot’ sound for all electro-lovers.

There are many featured bands I never heard of before and it also is a pity some of them never gained more recognition. Bands like Vita Noctis, Schicksal and Nacht Und Nebel (featuring an early song) definitely are the most familiar names, but I also discovered RDP (which later on became Palais Des Bauzards), Analysis and Man Without World.

One of the few exceptions to the rule is Unidentified Man, which is a contemporary project, but composing music in the purest ‘analog’ vein of the 80s.

+ + + : Speaking for myself I’m tired of the usual compilations featuring label bands and other so-called conceptual releases dealing with one genre. They don’t bring anything new, while this kind of compilation takes us back to the sources of electronic music by revealing some little, forgotten treasures. This is a great concept, which has been released in the purest 80s vinyl format.

– – – : A few songs clearly suffer from the weight of time and feel a bit like watching a silent film in black & white.

Conclusion: I can only, but express my gratitude and respect to Walhalla Records for bringing us back these ‘old’ sounds and experiments. Back in time it was extremely difficult for electronic bands to get some recognition and simply get some airplay. This is the total opposite then current streaming platforms and composing music with easy presets and software programs.