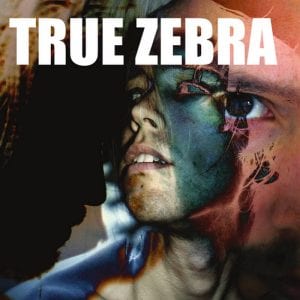 Background/Info: True Zebra is a Belgian solo-project driven by Kevin Strauven (who’s also involved with The Juggernauts). True Zebra self-released 3 albums in between 2012 and 2016. This official debut opus features tracks taken from the previous albums.

Content: Kevin Strauven is actually working on a complete new album so this kind of ‘best of’ is a good way to get introduced to his eclectic sound universe. The songs are covering different influences, which resulted in a somewhat versatile work moving from minimal electronics to rock-wave to EBM. The vocals are rather sweet-like.

+ + + : I definitely prefer the electronic-driven songs, carried by noticeable vintage synth layers. The minimal-like “Under Control” is a great piece of music, which reminds me a bit to Crash Course In Science. In a more EBM-vein “Transition” is carried by a solid bass line. Last, but not least I also have to mention the somewhat groovy-minded “Not Like Him No”.

– – – : I don’t have anything against diversity, but the different influences don’t always fit with each other. You get the impression to hear a band clearly in search of its sound identity. The transition from one song till another is sometimes abrupt. The rock-wave style (like featured on “The Silence”) can’t convince me at any single moment.

Conclusion: I should think that for True Zebra the best is yet to come. I sincerely hope this artist will mainly focalize on the electronic side of his work, which is promising and revealing a few cool cuts.