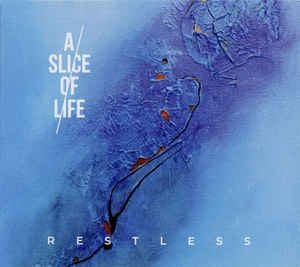 Background/Info: After a promising self-titled debut-EP Belgian formation A Slice Of Life is back on track unleashing their debut album on Wool-E-Discs. “Restless” features

Content: A Slice Of Life remains inspired by the 80s and bands such as Echo & The Bunnymen and Joy Division are still hanging over their music. But don’t expect to discover a new 80s clone. It’s just about inspiration as A Slice Of Life also brings something very personal. Their music is a true sonic fusion between cold-wave, post-punk and something dark-rock minded. The songs are carried by impressive guitar parts and reflect pure dynamism. One of the songs is sung in Dutch.

+ + + : A Slice Of Life doesn’t spare any effort to deliver a professional work. I really got the impression the band recorded this work in a professional studio while the truth is they did nearly everything in the purest DIY style. The guitar playing remains one of the band’s major strengths, but I also have to say a word about the professional and convincing vocals. The songs reveal strong choruses, which definitely remains one of the most important elements when composing this kind of music.

– – – : I’m just less convinced by the more rock-inspired cuts, but I’m not really complaining. All songs from the previously released EP are still featured on the album, so no real bonus here.

Conclusion: A Slice Of Life simply confirms the potential they’ve shown at their debut-EP. This band could become the Belgian  next big thing…

Tags: A Slice Of Life, post-punk