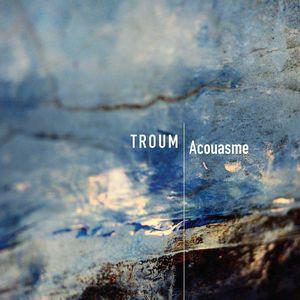 Background/Info:Glit[S] ch and Baraka[H] better known under the Troum moniker can already look back on an impressive discography, which started long time ago before Troum when both members were involved in Maeror Tri.

Troum has released an impressive number of productions featuring multiple collaborations. “Acouasme” has been announced as different and more industrial compared to previous productions.

Content: The universe of Troum remains an inspiring sonic world where they move from intriguing sound labyrinths towards ghost noises and ritual passages. The ambient atmosphere injects a kind of desperate feeling leading into nihilism and the darkest, imaginable visions in life.

Troum prefers to move throughout the darkest depths of human mind, which is an aspect reinforced by humming waves and spooky sonic elements. The music becomes partly cinematographic, but still carried by a strong ritual aspect. The industrial percussion passages accentuate the global feeling of terror.

+ + + : I was impressed by the fine elaboration of the work and the slowly progression of the compositions. There’s a fascinating crescendo-like writing explaining the long during tracks featured at this work.

– – – : I expected a bit more explicit industrial elements, which on some passages would maybe have reinforced certain power emerging from the tracks.

Conclusion: Troum is the kind of music project that can’t leave you unaffected. The sound has a serious impact on listeners and you better avoid “Acouasme” if you’re a novice! Troum sound sick and magic!