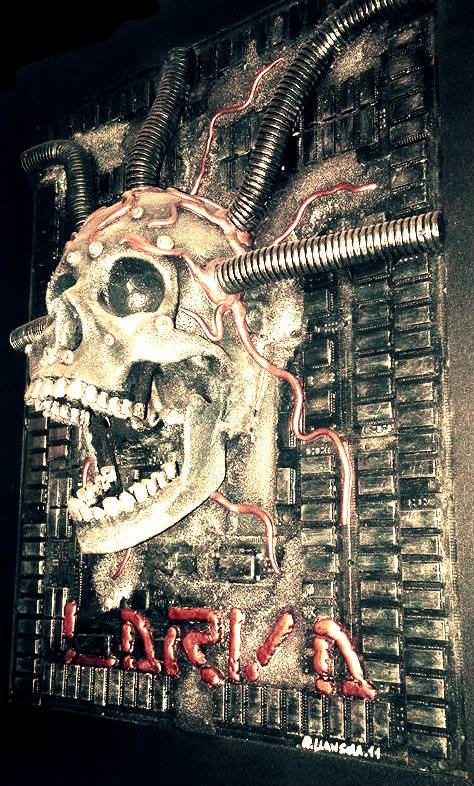 Based in Barcelona InqUesT and Anoxia are better known as Larva. This dark-electro formation started in the late 90s as Morbid Mind, but changed their name into Larva. InqUesT got joined by 2 new members, but the current line-up consists of InqUesT (machines, vocals & lyrics) and Anoxia (sequences).

Larva became one of the ‘oldest’ servitors of Advoxya Records, on which they released an impressive number of productions. They last year released their most accomplished full length to date “Abominations” while the band is actually working on new material for their next album.

Q: Larva is already active for quite a long time so what do you keep in mind from the early days, the way it all started and how do you see the evolution of Larva all over the years?

InqUesT: I always try to keep in mind how it all begun. I’m looking to the past in a sweet way; a period without money, without almost tools, but only with great energy and motivation.

And the way we evolved during the last years?  Mmmm…

I think age affects everything and also in our way of composing music. We of course have more knowledge now, so it van be noticed in the production and the overall sound of the new work. You can even notice it in the lyrical aspect; the lyrics becoming more elaborated and deeper whatever the subject.

Q: Right now you are in between 2 albums so how do you look back at the “Abominations”-album and what might we expect from the new work? Do you see an evolution regarding influences, sounds and production?

InqUesT: Yes, right. I think the fans and followers can expect more complex songs and structures. We didn’t lose our taste for experimentation and the exploration of new skylines.

Our influences are basically the same (and I’m even listening these days to more ‘conventional rock music’); but the knowledge it’s always growing. Maybe the new work will be a bit faster; but without losing the slow classic Larva’s songs.

Q: The image of Larva seems to be an important- and an essential element in your work. Tell us a bit more about it and what are the feelings/emotions you try to expose?

InqUesT: Well, our image was really natural to us…  it’s not really a thought concept. We try to incorporate the elements that we feel inherent to our music, and the things that make us feel comfortable. We are punks in essence (in a way of life, I mean).

And talking about our live performances; we try to offer something special (not just a usual live show). A complete experience for the audience. In the end we want to be loved or hated. Extreme positions!

Q: After a previous ‘tribute song’ to Placebo Effect, the song “In The Edge Of The Blade” (featured on “Abominations”) is featuring Axel M. from Placebo Effect. Tell us a bit more about the accomplishment of this ‘special’ song and your fascination for this band?

InqUesT: As teenagers we grew up listening to this kind of bands  (dark-electro or industrial bands from the 90/80). So, we felt paying a tribute to one of our favorite bands could be interesting. We knew Axel, and started to interact almost day by day to finally get the ‘tribute song’

Finally we ended doing a few songs together (or sketches as I say); and this one was the selected to be part of the CD. For us it was an immense honor to collaborate with a band that we liked and followed for all those years. That’s the magic of music!!

Q: In which way does the economic crisis in your homeland affect you as a musician?

InqUesT: In a lot of different ways… Economic crisis means less money for the people, which means less people paying for culture (as a music product, live show, merch., etc). We are lucky enough to have  a few countries with a consistent and growing fanbase. So they support us and make us feel loved, and of course, thanks to them, we can continue doing what we want to do.