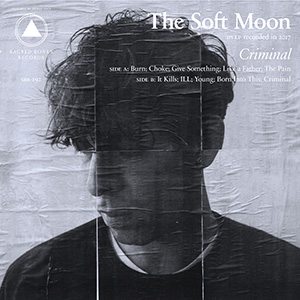 Background/Info: Album number 4 for solo-artist and multi-instrumentalist Luis Vasquez. “Criminal” describes Luis going to war with himself through confession and finds him battling with shame, guilt, his own sanity, self-hatred, insecurity and self-entitlement. He reveals his feelings from his violent childhood which makes it a self-reflective album, released to find relief for his own wrongdoings and for those done by others that have affected him.

Content: “Burn”, the first song, has an amazing bassline and a screaming, almost howling Vasquez, which is definitely something we’re not used to hear on previous albums. “Choke” is a very danceable song full of soft synths with a whispering voice over it. The first 2 songs remind you automatically of the older works of Nine Inch Nails. Time for some moody calm stuff then with “Give Something” followed by the EBM/industrial track “Like A Father”. The deep raw bass on the exploding song “The Pain” sounds amazing, which makes it one of the better songs! The guitars on “It Kills”, a downtempo track, will calm you down in your mind and make you think and dream away. This atmosphere is abruptly broken by “ILL”, that best can be defined as a mixture of dubstep and noise. More soft synths and whispering voices on “Young” followed by the uptempo “Born Into This”. The guitars on “Criminal” are in perfect combination with the synths, which makes it the climax of another typical Soft Moon masterpiece!

– – – : The tracks “Like A Father” and “ILL” have a deep contrast with the other songs. They are not bad songs but bring the complete atmosphere a bit out of balance.

Conclusion: Eight years already after the release of the self-titled debut-album, and The Soft Moon keeps delivering darkness and melancholy. Vasquez recorded the 10 tracks about his inner pain in his current hometown Berlin and changed like this his personal childhood traumas into something more succesful.

Since you’re here … … we have a small favour to ask. More people are reading Side-Line Magazine than ever but advertising revenues across the media are falling fast. And unlike many news organisations, we haven’t put up a paywall – we want to keep our journalism as open as we can. So you can see why we need to ask for your help. Side-Line’s independent journalism takes a lot of time, money and hard work to produce. But we do it because we want to push the artists we like and who are equally fighting to survive. If everyone who reads our reporting, who likes it, helps fund it, our future would be much more secure. For as little as 5 US$, you can support Side-Line Magazine – and it only takes a minute. Thank you. The donations are safely powered by Paypal.
Tags: Berlin, dark wave, luis vasquez, post-punk, The Soft Moon