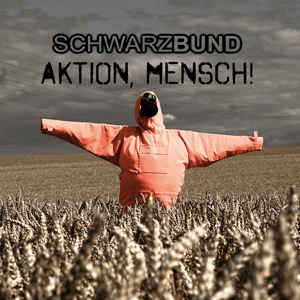 Background/Info: German trio Schwarzbund features René Müller who you maybe remember from DavaNtage and Future Trail, Dirk Wuttig and Martin Klingemann. This is the third album by Schwarzbund, which also is the first one released on Sonic-X.

Content: Schwarzbund brings different-, but related music influences together creating a sonic cocktail of electro-pop and EBM. The album reminds me to a mix between And One, Frozen Plasma and Patenbrigade: Wolff.  The main part of the album is rather soft and easy-going, but there are also a few harder cuts for the clubs.

+ + + : There’s a nice twist between melodic pop passages and EBM sequences. The German vocals accentuate the link with aforementioned formations although Schwarzbund also tries to create their own approach. I like the songs with great melodic choruses, creating an elevating effect. “Einklang” is a well-crafted and efficient cut illustrating the melodic approach of this work while the EBM touch gives the song more power. But the album is not only about power and danceable cuts, but globally speaking an easy, listening work that will mainly appeal for lovers of electro/body-pop music.

– – – : There are to many ‘soft’ songs featured, which after a while become a little less annoying. I’m missing power in these songs, which can only be heard in a few, rare tracks.

Conclusion: “Aktion, Mensch!” is a well-crafted work, but I get the feeling there’s more potential in this work than what came out of it.