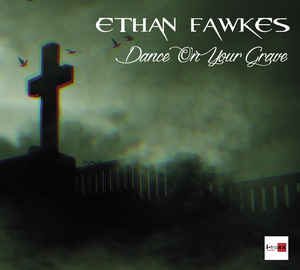 Background/Info: Belgian producer and DJ Ethan Fawkes has released an impressive number of EP’s over the past few years. “Dance On Your Grave” is a title, which sounds clearly inspired from the famous French poet Charles Beaudelaire, reveals 15 songs. It’s a mix between new songs and tracks that have been previously released on 5 EP’s released on I-Traxx Red Edition.

Content: Ethan Fawkes remains pretty faithful to his EBM minimalism carried by solid bass lines and a dark-technoid approach, which comes more through during the final part of the album. There’s a mix between instrumental cuts and sung ones revealing the growling timbre of voice of the artist.

One of the main characteristics of this album is that there are no remixes featured. That’s a noticeable element as Ethan Fawkes likes remixes and sometimes abuses a bit of this formula.

+ + + : Ethan Fawkes is something special; this artist is moving in between two different genres, which are however related with each other. It’s the kind of sound that will maybe more appeal for EBM lovers instead of techno freaks. Sound-wise I like this minimalism while I also enjoyed some tracks featuring analogue-like treatments. The already familiar “Cruel And Alone” is a noticeable cut in the genre. Ethan Fawkes constructed a kind of sonic bridge bringing retro elements together with contemporary influences. There’s an excellent twist between already familiar cuts and new songs. The final part of the album is absolutely remarkable revealing multiple cool tracks.

– – – : I think it remains a challenge to mix different music genres, each appealing for a different audience. Ethan Fawkes is regularly switching from more techno-driven releases and other acid-inspired EP’s towards minimal EBM. It might be a little less confusing for the listeners.

Conclusion: Ethan Fawkes sounds to me like the Belgian Terence Fixmer. It’s not exactly about a comparable sounds, but clearly the same influences. This album is an opportunity to get more familiar with the work of this artist.

Since you’re here … … we have a small favour to ask. More people are reading Side-Line Magazine than ever but advertising revenues across the media are falling fast. And unlike many news organisations, we haven’t put up a paywall – we want to keep our journalism as open as we can. So you can see why we need to ask for your help. Side-Line’s independent journalism takes a lot of time, money and hard work to produce. But we do it because we want to push the artists we like and who are equally fighting to survive. If everyone who reads our reporting, who likes it, helps fund it, our future would be much more secure. For as little as 5 US$, you can support Side-Line Magazine – and it only takes a minute. Thank you. The donations are safely powered by Paypal.
Tags: EBM, Ethan Fawkes