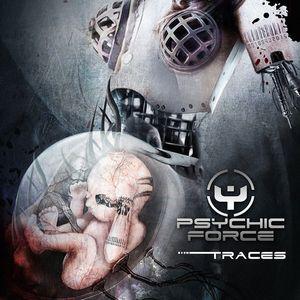 Content: After the “Mutilation” album it’s now time to (re)discover the “Traces”-full length album, which has been recovered from dust by a serious remastering. “Traces” was released in 1994 by KM-Musik and featured 11 songs in the vein of their debut work.

This is an opportunity to get back to the 2nd album by The Psychic Force revealing a more elaborated writing. That’s for sure the main element why this opus sounds less affected by the weight of time. There still is a real strong influence of The Klinik while the cold and more sophisticated approach is also reminding me of Mortal Constraint. Just pay attention for “Like An Animal” revealing great treatments and spooky vocals.

The shadow of The Klinik hangs over multiple songs, but I’m sure that “Killing Is An Art” and especially “Locked” will evoke some real good souvenirs. This work totally stands for the dark EBM sound of the 90s. There also is a somewhat electro-industrial input, which is noticeable on “Gravity Is Present”. This is cool song reminding me of the electro-industrial style of Dive and the icy, sophisticated sound of Mortal Constraint (again).

The final song was a real surprising cover version of John Foxx’ mega hit “Underpass”. It’s not exactly the kind of cover I expected, but it remains an excellent version mixing the harshness of the vocals and the easily recognizable tune running through this song.

The bonus songs were originally released on cassettes and compilations, which are hard to find today. Just like with the bonus tracks released at “Mutilation”, we go back to their split-tape with their side-project Systhemfehler. The harder and more electro-industrial song “Systemfehler” was originally released by Systemfehler and remains a cool surprise. I was less convinced by the bonus cuts although it’s a fascinating exploration.

Conclusion: “Traces” revealed a more mature production characterized by some well-crafted and efficient songs, which maybe didn’t get a deserved recognition.