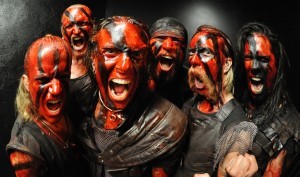 It seems the people at Leeds Beckett University have a bit too much free time on their hands. A new study from that University has ‘revealed’ how the metal music subgenre of folk metal is according to them glorifying the superiority of white, male Europeans.

Let’s have a look in detail what Professor Karl Spracklen’s study says. The study was published in a special issue of the journal “Metal Music Studies” on gender, race and class, edited by Rosemary Lucy Hill (University of Leeds).

Professor Spracklen explained: “Through the study, I found that although women fans of heavy metal enjoy folk metal with the same kind of passion and intensity as male fans, and there is no doubt they find identity and belonging through the music, the heart of folk metal is predominantly masculine. The warrior myth that folk metal is focused on is normalising this masculine predominance in our modern day world- men still have enormous social, cultural and political power. (…) It is showing white men how to be white men and showing women and ethnic minorities their place in European society.”

Within Spracklen’s study, you’ll find an analysis of five bands (yep, 5, a huge lot no?) including Turisas (see picture by Stephanie-Cabral above), Tyr, etc..

Spracklen explains: “The bands in the research are all trying to identify with some reputed folk culture that existed before modern times – a culture of pure white people, mono-cultural and mono-racial. In some bands, there is an explicitly racist purpose for their adoption of Thor’s hammers, Viking imagery and heroic pagan myths. While I do not think that the folk metal bands focused on in this research are explicitly racist, they are certainly romantic, conservative nationalists who sell the idea and myth of racial purity. They reduce complex ideas of roots, identity and belonging to simple, imagined and imaginary communities defined by race and nation.”

They didn’t say whether Soukous is glorifying the superiority of black, male Africans. In a nutshell, another study that belongs in the dustbin.