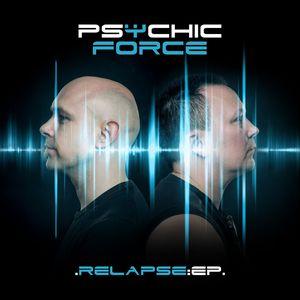 This German duo set up by Michelle Christiansen and Jörg Charnowski reformed after an absence of 20 years! What have they done in the meantime? Were they still listening to electronic underground music? Maybe a few good questions for the interviews, but fact is that they’re back on track getting signed to one of the leading labels in the genre.

I didn’t know what to expect, and I was a bit afraid of what I’ve been proposed to discover. I have the impression that they remain faithful to some of their early standards, which are dealing with EBM and dark-electronics, but they simply transposed it into a quite contemporary and exciting production. Both debut songs are new cuts, which took all my doubts away. The Psychic Force is not a kind of ghost in search of the past, but a dark-electro inspired act dealing with a modern electro approach although based upon a retro style.

“No Secrets Allowed” reminds me a bit of a softer version of Funker Vogt. The sound is not as hard and the vocals are not as harsh than Funker Vogt, but it are a well crafted and fully accomplished song. “The Fog” moves in a similar way, but becomes a little bit harder. This is a rather typical dark-electro cut, which perfectly matches with the current standards.

“Still Walking 2015” is another song to watch out for. This is an old track that originally appeared as the final song on their debut full length “Mutilation” (1992). The song features a few original elements, which are reminding me of one of their main inspiring groups (cf. The Klinik), but the production has been boosted with some refreshing, but still dark sounding electro arrangements. This song perfectly shows the step forwards of Psychic Force, which clearly appears to be experienced ‘modern’ artists.

The 10 songs left are remixes of the aforementioned three songs. Some compatriots like Plastic Noise Experience and Serpents each took a remix. I highly recommend the somewhat industrial-minded remix of “The Fog” by Serpents.

But the best remixes concern “Still Walking” and especially the remixes from Framework and Kromproom. The last mentioned band is not exactly the most familiar name active in the scene, but the remix is a cool and refreshing piece mixing old-school elements together with new ideas. Another interesting remix has been made by Trackologists, which seems to be a side-project of Heimstatt Yipotash.

The remixes of the other songs are less convincing although I noticed an original and somewhat epic-minded transformation of “The Fog” by Eta Eridani.

Conclusion: “Relapse” sounds as a promising comeback from a long-time forgotten 90s band. The new songs are perfectly adapted to the current dark-electro format so I’m really wondering what the full length will sound like.