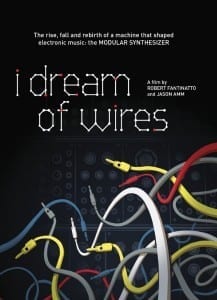 Content: We’re not used to review DVDs and more especially when it concerns documentaries, but this film is one, which will interest all lovers of electronic music. “I Dream Of Wires” was made by an original idea of Robert Fantinatto and Jason Amm. Some of you probably know Amm as the hidden force and brain behind the Solvent music project.

The documentary is a search to understand the rise, fall and resurrection of THE machine that was the origin of electronic music. “I Dream Of Wires” is a fully appropriated title to remember us the history of the legendary modular synthesizer.

The documentary brings us back at the end of the 19th (!) Century and the creation of generators and electricity. They created a kind of noise, which was the basis to conceive machines able to create music. It was a purely scientific research that happened in laboratories. So we get informed about the creation of oscillators during the ’50s, which would become essential equipment in the construction of the first synthesizers.

One of the most important and definitely pioneers in the entire history of electronic music was a physician. Robert Moog was a serious impact on the electronic music and it remains a mystery how electronic music would have sound today without the work of Moog. We get an idea about how so-called Voltage Control Oscillators (VCO) got created and how a keyboard was used as a controller to the Moog ‘machine’. It all leads to famous machines that were used during the ’70s like the Minimoog and ARP2600.

A next interesting passage concerns the rise of punk music, which in a way became a serious obstacle against the evolution of electronic music, but modular synthesizers got also exposed to a new form of synthesizers, which were conceived in Japan. There’s an interesting talk about the legendary DX7 from Yamaha becoming the pioneer of programmed sounds (presets), the evolution into digital equipment and the first Workstations.

The documentary tells us that the rise and evolution of Acid music contributed to the rebirth of analogue machines and the use of the still famous 909 and 303.

The reliability of those machines and their maintenance both contributed to the extinction of modular machines till during the 90s Bruce Duncan came up with new evolutions, creating modern modular equipment (Modcan modular synthesizers). It all becomes rapidly clear for non-musicians that the modular synthesizers have been always more creative and unique to create unique sounds instead of presets.

There also is an interesting extra featuring different passages like an interview with Trent Reznor & Alessandro Cortini (NIN) or a look at the studio of Vince Clarke (Depeche Mode, Erasure…), but also clips by Solvent, which is an opportunity to (re)discover the music of this great artist.

Conclusion: “I Dream Of Wires” is a real informative and fascinating view at the history of electronic music and more especially about the enigmatic and fascinating modular synthesizers. I’m not surprised this movie seems to have become a very successful item.

Tags: I Dream Of Wires