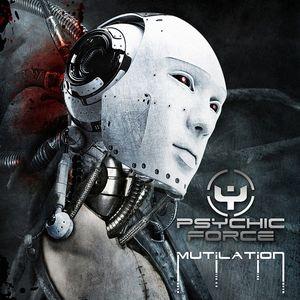 Content: The Pysychic Force is one of the newest signings to the already impressive Alfa-Matrix roster, but it still is the resurrection of a German band that was active during the early 90s. It seems that their new EP “Relapse” was followed by the request of numerous fans to push the band to re-release their back catalogue.

“Mutilation” was the debut album of the band, which was originally released in 1992 by KM-Musik. The work featured 12 songs, which were mainly dealing with dark EBM mainly inspired by the work of The Klinik. It has to be said and reminded (especially for our youngest readers and electro lovers) that The Klinik was one of the main sources of inspiration for dark-electronics during the 90s. The Psychic Force was not one of the leading formations during the 90s although they were a recognized and praised act by EBM tasters.

I remember to have been really addicted to some songs of this work so it was a pleasure to listen back to “Mutilation” after such a long time. The initial magic of the work is a bit gone and that’s rather understandable. There’s an important hiatus between the initial release and the current dark-electronic standards. “Mutilation” suffers from the weight of time and that’s not an element the band is absolutely responsible for.

So it was ‘fun’ to rediscover songs like “Mutilation”, “Praise The Chainsaw” and “Twilight Zone”. “Machine’s World” remains one of the most credible songs. It all sounds like this harder piece was more resistant to the 23 years separating the initial release and the remastered version. EBM fans will be also pleased to (re)discover “Time Of War” for evoking some vague and early Front 242 elements.

This “Bonus Tracks Version” features 7 extra songs, which mainly appeared on the cassette “Body Language” plus another cassette, which was a split tape between The Psychic Force and their industrial-minded side-project Systemfehler. This is a nice bonus for the early fans of the band. The influences remain pretty similar and the link with The Klinik is already easy to make. “Totes Fleisch” is a pretty cool song, which is not as powerful, but carried by a great dark atmospheric electro style. I also have to mention a surprising cover version of “Exodus”, which is a song of Boney M plus “Noiseboys”, which was originally written by Stephan Eicher (Grauzone) and transformed into a Klinik-al version.

Notice by the way that the artwork (cover) of this new edition is totally different than the poorly inspired, but typically 90s like artwork.

Conclusion: “Mutilation” sounds like it was seriously hit by the years that have passed, but it’s a nice gift for the 90s EBM lovers and especially for the survivors of the band’s fan basis.