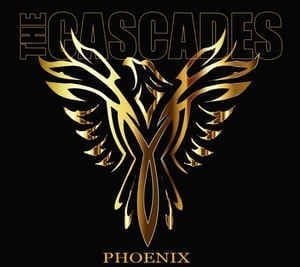 Background/Info: Originally set up in the late 80s, The Cascades released their most significant material during the early new millennium years. After a hiatus of 10 years they struck back in 2016 (cf. “Something To Happen”). Echozone also released the great ‘best of’ album “Diamonds And Rust” (2017) while we here welcome the new album of the trio lead by M.W. Wild.

Content: “Phoenix” is an album without real surprises, but simply revealing efficient gothic- and goth-rock music. The cavernous vocals and dark guitar parts will rapidly remind you bands such the Mission, The Sisters Of Mercy and The 69 Eyes.

One of the most noticeable cuts from the album is the cover version of Hüskur Dü’s legendary hit “Diane” (and which has been already covered one hundred times before). The cover features female backing vocals while there also is a remix by M.W. Wild.

+ + + : This band deals with good-old goth-rock music, which will clearly ravish all dark souls. The songs are accomplished by great choruses and the charisma of their singer. There are numerous cool songs on this album, but I have to say the adaptation of “Diane” into the style of The Cascades is absolutely brilliant. It all sounds they they’ve written this song. Another noticeable piece is the pretty Sisters Of Mercy-like “Phase 4”.

– – – : My only reproach to The Cascades is that they hold on to the same-old sound formula. The songs are pretty similar and rapidly predictable.

Conclusion: This is an album without surprises if you refer to the genre this band is dealing with, but it also is an album filled with great tracks. Absolutely recommended!