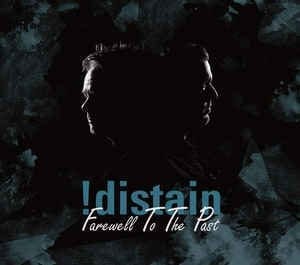 Background/Info: Ano 2018 German synth-pop formation !Distain became a duo. Alexander Braun and Manfred Thomaser both remain the only members on board and strike back with a new chapter in the !Distain discography. It’s the band’s eight album since their set up in 1992. The work was preceded by the singles “SynthPopBoy” and “Maid Of Freedom”. Alex Braun also release a solo-EP with cover versions entitled “Eiskalt”.

Content: !Distain remains faithful to their original influences. The band is driven by ‘classical’ synth-pop music, which moves from ‘happy-pop’ songs to sweet sounding songs with a Vince Clarke flavor on top to somewhat harder passages to an instrumental-cinematographic cut. !Distain remains a band that will appeal to lovers of Depeche Mode, Human League and related bands in this genre.

+ + + : “Farewell To The Past” became a rather diversified opus, but still easily recognizable for all lovers of this band. The songs and production both reflect maturity. The arrangements are delicate, creating a truly sensitive approach. It also is a music that will get you happy and I especially refer to the opening song “The Cosmic Revolution” featuring Seyhan, but still a sound that will get you into dance (cf. “Wer Im Kreise Geht”, “Der Hintenmann”, “Targets”). One last noticeable song is the already familiar “SynthPopBoy” for its funny lyrics.

– – – : The album is enjoyable, but is missing ‘real’ hits. That’s a bit what I regret and especially compared to the early years of !Distain. I think some songs are missing some extra catchy touch.

Conclusion: It always is a pleasure discovering new work by !Distain although I must say that the initial magic from the early years is definitely gone. The music becomes sometimes too predictable.

Since you’re here … … we have a small favour to ask. More people are reading Side-Line Magazine than ever but advertising revenues across the media are falling fast. And unlike many news organisations, we haven’t put up a paywall – we want to keep our journalism as open as we can. So you can see why we need to ask for your help. Side-Line’s independent journalism takes a lot of time, money and hard work to produce. But we do it because we want to push the artists we like and who are equally fighting to survive. If everyone who reads our reporting, who likes it, helps fund it, our future would be much more secure. For as little as 5 US$, you can support Side-Line Magazine – and it only takes a minute. Thank you. The donations are safely powered by Paypal.
Tags: Distain, synth-pop