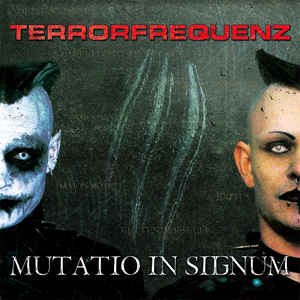 Background/Info: Terrorfrequenz strikes back with a new full length album. The most familiar work probably remains their second album (cf. “In Der Dunkelheit”) released in 2009 on Wannsee Records. The two albums left were self-released. The band now joined hands with Sonic-X on, which they already released the “Mutation”-EP. Another important element is the new line-up, front man Manuel ‘Mangler’ having been joined by Liam Summers.

Content: “Mutatio In Signum” is an album for dark-electro lovers. The band call it ‘hellelectro’, which in a way is an appropriated description referring to dark compositions carried by icy synths and driven by danceable beats. The German lyrics accentuate the band’s origin and still remain a quite familiar aspect for German bands dealing with this kind of music.

The two last cuts are remixes by X-O-Planet and Intent:Outtake.

+ + + : Terrorfrequenz is a fully representative band in a music style, which counts numerous ambassadors. So you’ll not find the main strength of “Mutatio In Signum” in the music format, but in the way it has been written and produced. This is a well-crafted opus featuring a few cuts adding some diversity to the tracklist. I’m referring to the potential club hit “Terrorfrequenz”, but more especially to the minimal- and somewhat industrial like “Exitus”.

– – – : I can’t get away from the feeling that this is the kind of work I’ve already heard numerous times before. Terrorfrequenz is a big cliché in the image and the sound, but at the other hand, I have to admit it’s a good one! I just expected a bit more dance power and especially potential hits.

Conclusion: The title of this album can be translated as ‘in sign of change’. Except the change in the line-up I’m afraid there’s nothing that has really changed, but do we really need or expect changes when the result gets enthusiastic reactions!?