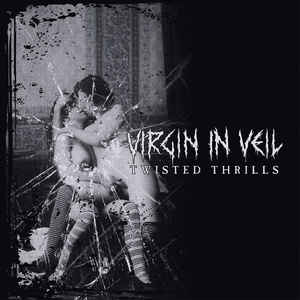 Background/Info: They claim to compose death-rock music and are now back on track unleashing their second full length. Finnish formation Virgin In Veil gained some recognition with the debut full length “Deviances” (2016), which brought them to play at several places in the world and some noticeable festivals.

Content: “Twisted Thrills” features 10 songs for only 24 minutes! The songs are short and dynamic. Driven by a speed cadence, some parts of the work remind me of Killing Joke, but you also will notice punk elements. The deep resonating bass play has this late 80s spirit. The guitar brings this work to a higher dimension while the synth parts add the final touch.

+ + + : Virgin In Veil is not what I would call an 80s copyist, but they bring the magic of the new-wave and post-punk alive with power and a very personal touch on top. That’s probably what they call ‘death-rock’. I like the rawness of the production, but also the dark sphere supporting the songs. The guitar playing is one of the band’s main strengths.

– – – : The tracks are pretty similar and especially very short. I don’t have anything against short tracks, but it doesn’t leave that space to elaborate the production and that’s a pity.

Conclusion: Virgin In Veil makes me think to a steamroller; fast, powerful and merciless! So you know there’s nothing that can stop this sonic ogre, which doesn’t mean that I enjoyed the entire album.

Since you’re here … … we have a small favour to ask. More people are reading Side-Line Magazine than ever but advertising revenues across the media are falling fast. And unlike many news organisations, we haven’t put up a paywall – we want to keep our journalism as open as we can. So you can see why we need to ask for your help. Side-Line’s independent journalism takes a lot of time, money and hard work to produce. But we do it because we want to push the artists we like and who are equally fighting to survive. If everyone who reads our reporting, who likes it, helps fund it, our future would be much more secure. For as little as 5 US$, you can support Side-Line Magazine – and it only takes a minute. Thank you. The donations are safely powered by Paypal.
Tags: Ogre, post-punk, Virgin In Veil