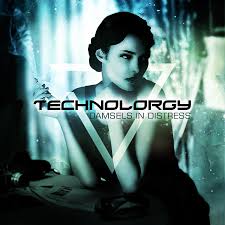 Content: The recently released “Dying Starts”-album by the Greek combo Technolorgy seems to have received a considerable success. I’m not that surprised about the positive response as this work revealed multiple electro-pop highlights.

One of the main tracks on the album is without a shadow of a doubt “Damsels In Distress” so it’s a rather logical choice the band has chosen this song as title track for the new EP (the 2nd taken from the album).

The original version takes off and simply confirms its solid pop potential, which is mainly carried by a superb, catchy tune. It’s a well-crafted and polished electro-pop song with a little dark shadow all over it.

We next get 2 remixes by the upcoming Ginger Snap5. I especially recommend their “Club Mix”, which mixes elements of electro-trance and the original pop vibes of the song. The other remix is somewhat wafting and more into reverie.

You might have discovered the Cygnosic remix at the limited CD-version of “Dying Stars”. It’s an enjoyable remix; nothing less, nothing more.

Last, but not least we get an exclusive B-side song entitled “Femme Fatale”. The title sounds pretty sexy while the song is just a cool composition on which Technolorgy reveal their great sound treatments and multiple studio effects.

Conclusion: “Damsels In Distress” is a damn good choice for an EP title-song, but I expected a bit more from the remixes. The original song remains the best one!