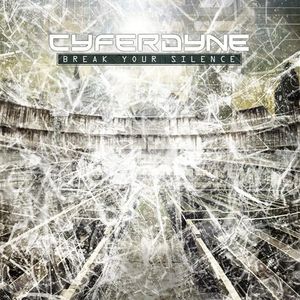 Content: The Cyferdyne trio reactivates their “Keep Your Silence”-album with this “Break Your Silence”-album. The 2nd full length by the UK band got a successful response from its original release in 2014. Digital Audio World has now re-released the original album together with an extra disc filled with remixes. This extra disc is also available as digital album revealing 3 extra remixes (which have been added to the main disc of the CD release as well).

“Break Your Silence” reveals 9 previously unreleased remixes by bands like C-Lekktor, Die Sektor, Ginger Snap5, Terrolokauts ao. The bonus remixes at the digital format have been accomplished by Assemblage 23, Aesthetic Perfection and Phosgore.

The first part reveals a few interesting cuts, but no real potential hits. Panic Lift did an interesting rough pop inspired job at the remix of “Fracture” while “Visions” has been remixed by Terrolokaust in a kind of rock-pop style. The guitar riffs inject this rock-minded input.

Aesthetic Perfection remains a real genius formation and without a shadow of a doubt one of the growing sensations in the scene. Their techno-body remix of “Numb” is an absolute masterpiece.

Referring to masterpieces, the second part of the work reveals a few more outstanding remixes. Cygnosic, Ginger Snap5 and of course the powerful ‘rave’ minded remix of “Numb” by Noisuf-X are pure lust for the dancefloors, but the best is yet to come.

Assemblage 23 definitely deserves to get an award for the most inspiriting remix, transposing “Jigsaw” in to a great vintage-minded version while remaining totally dancefloor minded. This is one of the best Assemblage 23-remixes in history!

I also have to mention the great remixing skills of Phosgore, which again confirms to be one of the most talented artists from the Noisuf-X class. “Cables And Codes” sounds now like a pumping industrial rave-pop song. Last, but not least, C-Lekktor also confirms his growing talent remixing “Disease” into a heavy, haunting dark-electro version.

Conclusion: There’s a great electro diversity running throughout the remixes, but it especially must be a real pleasure for Cyferdyne to get such inspiring remixes from most of the bands.

Since you’re here … … we have a small favour to ask. More people are reading Side-Line Magazine than ever but advertising revenues across the media are falling fast. And unlike many news organisations, we haven’t put up a paywall – we want to keep our journalism as open as we can. So you can see why we need to ask for your help. Side-Line’s independent journalism takes a lot of time, money and hard work to produce. But we do it because we want to push the artists we like and who are equally fighting to survive. If everyone who reads our reporting, who likes it, helps fund it, our future would be much more secure. For as little as 5 US$, you can support Side-Line Magazine – and it only takes a minute. Thank you. The donations are safely powered by Paypal.
Tags: Cyferdyne