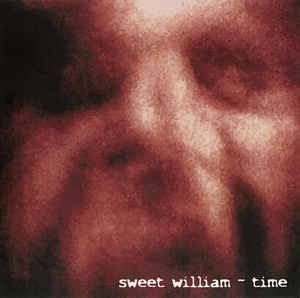 Background/Info: German formation Sweet William released this album for their 30th anniversary. The band was set up in 1986 by Oliver Heuer and has released an impressive number of productions. “Time” was released at the end of 2016, but we only got the album a few weeks ago. It’s a collection of previously unreleased songs plus new tracks composed in between 2014 and 2016.

Content: “Time” is an eclectic work, which features the familiar goth-rock sound of Sweet William, but also opens a door to some experiments with psychedelic passages and other influences. The guitar playing is quite impressive on the darkest, gothic songs, and it also excels in the psychedelic. I sometimes get the impression of hearing an imaginary jam session between Joy Division and The Doors.

+ + + : “Time” is one of the most diversified releases by Sweet William I’ve heard. From pure and well-crafted dark guitar-gothic songs to psychedelic guitar play to more heavenly parts reminding me of The Cure to more evasive songs, this album has a lot to offer. Sweet William feels comfortable dealing with all different kind of influences, but the main strength is the guitar play. From typical dark and anguishing new-wave to psychedelic to fuzzy parts, Oliver Heuer is a talented musician. This is a mature production accomplished with delicate treatments like piano arrangements and electronic treatments. I also have to mention the great vocals’ production, which here again features a great diversity.

– – – : I don’t see real minus points to mention. From a very personal point of view I’m less excited by the softer and into melancholia sounding tracks.

Conclusion: I’m still convinced Sweet William is one of those bands that should have deserved more (international) recognition during their entire career. “Time” is a great goth-rock production featuring multiple cool songs.