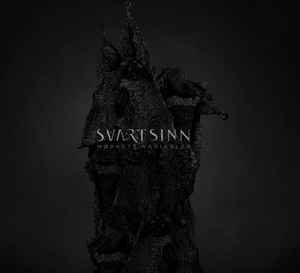 Background/Info: This new opus by Norwegian Svartsinn also is the first new studio album in 8 years. In the meantime Jan Roger Pettersen released a split album together with Northaunt and earlier this year the album “Collected Rarities”, which as the title indicates was an album filled with rarities. On “Mørkets Variabler” Pettersen got the company of cello player Amund Ulvestad. Notice by the way the album is also available on vinyl format as a double disc.

Content: Svartsinn bring us back to the essence of dark-ambient atmospheres characterized by the vision of abandoned landscapes and other endless sound corridors. Long and monotonous vibrating sound waves are leading the listener into a universe of discomfort. And when resonating screams of horror are suddenly disturbing the nihilistic mood hanging over the work you really get shocked. The cello adds an extra touch of sadness. The last cut is a remix by Kammarheit.

+ + + : “Mørkets Variabler” is an album without real surprises and I can’t affirm it’s innovating. But as I already say it brings us back to the essence of qualitative dark-ambient music, which is constructed with chilling sound, deep vibrating sound waves, elements of horror like screams, ghost-like voices and even some passages with percussion. It all together creates a strong visual appeal reaching its climax at “Where No Other Can Follow (Demon Stalker)” and “Echoes Of Silent Cries – Among The Sea Of Trees”.

– – – : This is a great album, which will hold you in its grip from start till finish, but it doesn’t bring anything new. But is it really necessary when you get such a great result?!

Conclusion: Svartsinn opens a gate to an imaginary vision of horror and hell. Forget the beauty of life and get ready to embrace the magic of darkness.

Best songs: “Where No Other Can Follow (Demon Stalker)”, “Echoes Of Silent Cries – Among The Sea Of Trees”, “In The Wake Of Azathoth – A Lovecraftian Epilogue”, “And In This Cloak Of Darkness I Cast My Shadow Short – Ghost Boy”.