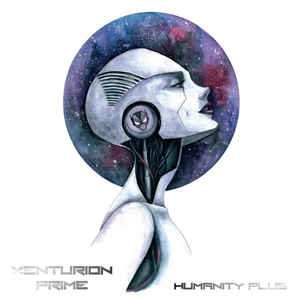 Background/Info: Bjørn Marius Borg and Hasse Mattsson were previously active under the Code 64, but they have also set up Xenturion Prime. A first album (cf. “Mecha Rising”) got released in 2014. The band is now back on track featuring Cathrine Räisänen Andersen as an extra member.

Content: Even if “Mecha Rising” was a successful album I wasn’t totally convinced with the complex approach. “Humanity Plus” remains ‘complex’ although more accessible. The work rather sounds as a synthesis between different influences, but with an omnipresent astral/space like dimension. There are four so-called “Artifact”-tracks featured, which are instrumentals with a strong cinematographic appeal, but still with influences reminding me of Van Gelis. It just reinforces the link with space-music and I sometimes get the feeling they’re composing space-EBM.

The majority of the songs are carried by hard-pumping kicks, great bass lines, noticeable sound treatments and cool vocals.

+ + + : I like originality and that’s what this album stands for. Xenturion Prime realized a real masterpiece! The instrumental cuts feature great soundtrack music, which is overwhelming, somewhat dramatic and mainly dreamy. The other tracks left are hard-hitting cuts accomplished with genius sound treatments. The psychedelic touch hanging over the work is something particular, but definitely an element you rapidly recognize. Another important element are the beautiful string parts this work has been made of. Xenturion Prime this way builds a bridge between early electronic music and contemporary productions. I also noticed a more aggreppo song (cf. “Neoexogenesis”) reminding me a bit of Dance Or Die.

– – – : There’s just one single and more electro-ballad like song (cf. “Departed”), which can’t convince me. This is a great piece of music although maybe not the most accessible album of the year.

Conclusion: Hard to say if “Humanity Plus” will become one of the best albums of the year, but there’s no single doubt it definitely is one of the most original and I dare to say, visionary work of the year. This is an intelligent electronic format, which can’t be compared to any other formation!