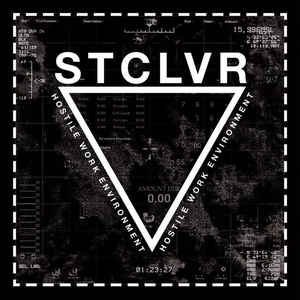 Content: While the earlier work (which you can discover at Bandcamp) reveals a brutal and industrial approach, this album is somewhat different. It remains pretty harsh (the vocals as well) and very industrial-like, but you also will notice a more electro-aspect coming through. The tracks are progressively moving into heavy noise outburst joined by dark and paranoiac-like electro-atmospheres.

+ + + : What I mainly appreciate listening to “Hostile Work Environment” is the ‘no-compromising’ approach of the production. STCLVR has something like their own sound moving in between industrial and noise with some extra electronic layers on top. The sound has something ‘disturbing’ and that’s another aspect I like here. I also have to say a word about the vocals, which aren’t just harsh, but still manipulated as an extra sound input.

– – – : STCLVR has something visionary, but I can’t really say to have been fully convinced. A good ‘stereotypical’ band is sometimes better than innovating artists.

Conclusion: STCLVR sounds like music from a pure industrial sonic laboratory. This could be the industrial music of tomorrow or just one more band that will never really break through.