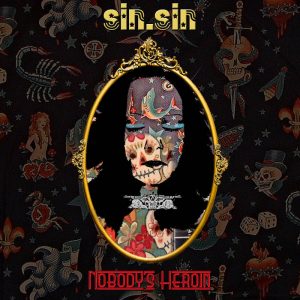 Background/Info: The fans of Belgian goth-rock formation Lovelorn Dolls for sure are familiar with the band’s front lady Kristell Lowagie. She set up her own project Sin.Sin and now has unleashed her debut opus after 2 noticeable EP’s. This album has been produced, mixed and mastered by Max from Helalyn Flowers who also did some extra programming.

Content: The album takes of with the main song of her debut-EP (cf. “Fairytronics”), which remains a great piece of evasive pop music revealing the sweet vocals of Kristell L and the cool pop style. Sin.Sin is not a typical electro-pop formation, but rather experiments with a ‘free-pop’-style which is now evasive, then raw and finally still into a kind of indie approach.  I now and then get the impression of hearing an underground version of Madonna.

The album is also featuring the “Blacklist”-song featuring Noemi Aurora (Helalyn flowers), which was the title song of the second Sin.Sin EP. The final track is a folk and intimate remix by The Breath Of Life.

+ + + : There’re a few great cuts featured here and I especially refer to the already familiar “These Pretty Things”, which has something magical because of its great chorus. I also enjoyed the rawer and unpolished style, which even sounds a bit into industrial-pop while accomplished with cool effects. I’m also pleased with the more indie-pop sounding “I Am So In Love” and “Mother” for the amazing vocals performance. I think the production skills of Helalyn Flowers mastermind have been quite important to get the final sound of this work.

– – – : There’re some great cuts featured, but still a few cuts with less substance. I can’t get away from the feeling that Kristell L still has to find her path in the electro-pop universe while she now feels a bit like an orphan who has lost her dear parents (aka her main band Lovelorn Dolls).

Conclusion: “Nobody’s Heroin” is moving from cool and noticeable cuts towards a few songs without real substance or sound identity.