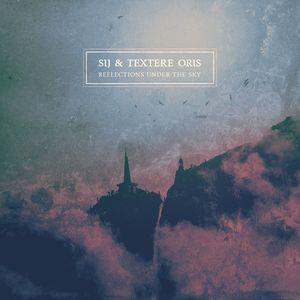 Content: The album takes off in a rather evasive and beautiful ambient way. You can dream away on dreamy sounds, reminding me of the chants of whales. Some fragmented vocals also join in, but the main characteristic of this work appears to be the use of multiple field recordings. It feels like a sonic discovery moving from forests to aquatic passages.

The production has been accomplished with some heavy basting sound treatments and depressed piano passages. The work becomes progressively colder and even a bit hostile. You rapidly realize that “Reflections Under The Sky” is digging towards the darkest aspects of life. The work is achieved by a surprising and somewhat surreal mix of noises and atmospheres, which are now like symbolizing the beauty in life and then its horror side.

+ + + : SiJ & Textere Oris has accomplished a remarkable and professional production. This is a real cohesive sonic puzzle.

– – – : There’s a discordance between the more reverie-like debut and the main passages, which are more into anguishing atmosphere and obscure music.

Conclusion: “Reflections Under The Sky” sounds like a classic work featuring different and very distinguishing parts on, which beauty and delicacy has been followed by evil and horror. I’m afraid this is nothing less than a perception of the world we’re living in.