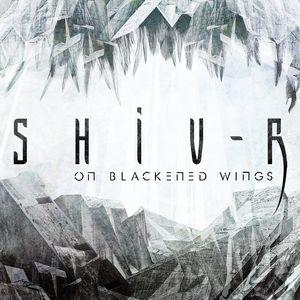 Content: Lat year Shiv-R released their 3rd full length “Wax Wings Will Burn” featuring 13 songs. “On Blackened Wings” moves back to this album delivering 13 remixes, but the main point is that all the songs have been remixed. They hold on to the original tracklist while we get two extra remixes from songs originally released on the “This World Erase”-album (2011).

I personally prefer this kind of formula instead of numerous remixes of one and the same song. “On Blackened Wings” also reveals a nice selection of bands like Freakangel, Thomas Rainer, Nitronoise, Acylum, ∆Aimon and less familiar names like Viral Millennium, Cellmod, Sleepless Droids, Symbiote, Syndroid or the remix contest winner, which was organized for this album Thanosmylonas.
The result is an interesting twist between different influences each band tried to inject into their own remix.

Cellmod is the first band that took me by surprise for the impressive sound manipulations alternated with a rather evasive chorus running through “Territory”. The remix of “Wolves” coming up next by Sleepless Droids is another noticeable cut. This remix reveals an elaborated approach in sound, while it remains a powerful track.

Dark-electro freaks will be pleased by the somewhat Suicide Commando inspired remix of “Of The Machine” by Acylum. But it all looks like some of the less familiar names had the greatest inspiration. Symbiote did a great and punchy job remixing “Shadow With A Voice”. Riotlegion maybe is a bit more renowned in the scene and they also did a noticeable work remixing “Payload” in a rather hard way while taking care for some cool sound treatments.

I also have to mention the somewhat symphonic approach in the remix of “Bood Rose” by L’Âme Immortelle. The remix by Thomas Rainer is maybe not the most noticeable one of the album although it’s one of the most ‘different’ ones.

I also have to tip both remixes from the songs that originally appeared at “This World Erase”. Syndroid remixed “Pharmaceutical Grade” into a kicking experimental way by accomplishing great sound manipulations. Last, but not least “God Is Art” has been reworked by Symbiote in a brilliant way. This remix is terrific and powerful body-tech driven piece of music. Notice by the way that Symbiote is the only band that has taken two remixes and both are absolutely successful.

Conclusion: You don’t hear me saying that I prefer this album over the original one, but I especially like the diversity emerging from the artists, which globally speaking did a great job. It’s quite interesting to realize some of my favorite songs on “Wax Wings Will Burn” are no longer my favorite ones on this opus. Great concept, cool album!