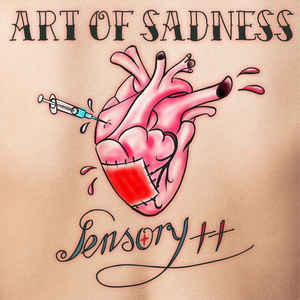 Background/Info: Belgian solo-project Sensory++ Sensory Plus Plus) joined hands together with Wool-E-Discs to unleash its first official album, which is featured in the ‘Belgian NeuMusik’-series.

Content: “Art Of Sadness” takes you away, in a distant, but familiar sonic universe. You’ll feel like awakening somewhere in the late 70s – early 80s listening to the first electronic ambient experiments composed by young and visionary artists such as Klaus Schülze, Tangerine Dream, J.M. Jarre and co. Somewhat mysterious, but always evasive, the six tracks have this retro-feeling accentuated by extended wafting string parts.

+ + + : I like the purity of the composition, which has been achieved with great sound treatments and this familiar, but essential astral dimension. The songs have been meticulously and patiently built up, resulting in a beautiful artistic expression. I noticed one somewhat different cut (cf. “Just Breathe”) although driven by a solid ambient basis. I also have to say a word about the sound production, which is absolutely phenomenal. “Silent Tears” probably stands for the ultimate track of the album where I got mainly impressed by the deep vibrating sound treatments.

– – – : The sound formula is a familiar one so it all starts to become a little less predictable after a while. Another little point I want to mention is the front cover, which is less representative for the kind of music Sensory++ is dealing with. I know this is just a detail, but in times where CD-sales are going downwards I would have preferred to get a more ambient-related artwork.

Conclusion: Sensory++ hasn’t stolen its place among the ‘Belgian NeuMusik’-series. I can’t say it’s one of my favorite releases, but it definitely is one of the most beautiful productions.