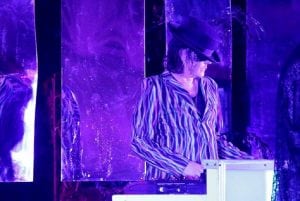 Nearly 30 years after the set-up of Juno Reactor, Ben Watkins has unleashed his 10th full length album entitled “The Mutant Theatre”. Released on Metropolis Records, this new opus reveals all familiar ingredients and influences we’re used to hear when listening to Juno Reactor. From pure psy-trance to tribal rhythms to cinematographic parts this new opus already sounds as a great and visionary work. And this is what Ben Watkins has to say about it.

Q: Five years have passed since your previous studio album “The Golden Sun Of The Great East”. Does it mean it becomes more difﬁcult to ﬁnd new inspiration and getting new ideas when it comes to composition, while “The Mutant Theatre” appears to be one of your best productions in history?

Ben: Well it certainly is a process for me, I have a lot of ideas, but working alone I can get very obsessed and lost in a track for weeks or months. I’ve been upgrading the sound and this has really taken a long time, I don’t feel as yet that I found what I am looking for, yet. if I didn’t need to engineer as well under my pseudonym of Otto the Barbarian I would find the work process a lot quicker.

Q: “The Mutant Theatre” is inspired and taken from the impressive dance collective you’re actually touring with. I get the feeling the live shows have been never that impressive and psychedelic. How did you guys met and how did you bring music, dance and visuals together?

Ben: I met the Russians in 2011, the ﬁrst was Stigma Show from St Petersburg, on an island in India, we were playing at a really strange festival that we had to travel by a small boat across the sea at night, The festival was promoted by a man we named the ‘Master of disaster’ as nothing went right for him or his punters, the one thing when the dawn rose The Stigma Show jumped onstage in their mirrored costumes as we played “Conga Fury”, which jump started the LSD… they just looked amazing. The other performance group was Agnivo  I met in Moscow whilst DJ-ing, that’s when I thought the of Mutant Theatre as a possible big show. Agnivo like militant guardians of an Orphean World.

Q: You’ve been always very concerned about live shows. It gives me the feeling you really want to get people happy when assisting to a live show, but at the other side it also reveals an impressive artistic concern and perfectionism. What is it really all about and what’s the importance of live shows?

Ben: It is one hell of a lot of fun, entertainment. In The Mutant Theatre show are 18 people, the stage show is heavily choreographed, and yet we can improvise songs, write them on stage, working with Budgie, Amir, who are not scared of it falling ﬂat, they just go for it and embarrass the danger, I love that feeling, the fantasy of our show, a collision between Barbarella and Pan’s Labyrinth, the collision between us and the audience is what makes working for months and months on a single shows worth while.

Q: The song “Return Of The Pistolero” is more than simply a wink to one of your biggest hits. I realized “Pistolero” has been written nearly 20 years ago now! Back in time I experienced this song as one of your biggest challenges! It was so different and unexpected and yet typically Juno Reactor-like. How do you look back about this song and what did you try to accomplish with “Return Of The Pistolero”?

Ben: Eyal my booking Agent at Hommega, suggested I do a sequel! I thought oh no, that won’t work. He kept pushing me so I called in Amir Haddad, a long time Juno Reactor guitarist, an amazing Flamenco player, and now also Hans Zimmer’s solo guitarist, and within a day we had the main riff, later adding Taja and ﬁrst time singer for Juno Reactor Tula Ben-Ari who sang all the Spanish vocals. It took months of tweeking, Gran Turismo heard it an wanted it for their new sports version. After that mix I kept going at it, it didn’t seem right, I ﬁxed just before the mastering. The ﬁrst “Pistolero” has so many fans I was more worried they wouldn’t like it, so I gave it a much bigger story this time.

Q: “The Mutant Theatre” features multiple guest vocalists while Xavier Morel and Johann Bley are good-old contributors when it comes to the writing process. What’s the input of all those people in the ﬁnal result and do you’ve some speciﬁc criteria when it comes to work with singers and other musicians?

Ben: Xavier will come in, drink bottle of bear, smoke a joint, fart, burp, generally make me laugh and come up with a load of sample idea’s to either disregard, copy or use. He generally doesn’t like what I do, but he gives me good references to tracks I would otherwise not be listening to. Also he is French, with a forehead not seen since the days the Neanderthal walked the earth.

UnderCover: I don’t usually work with other bands, but, on “Dakota,” I thought I‘d give it a try with Undercover. When I met them in Brazil I knew they knew F’ck all about Juno Reactor, but they did a wild version of “Conga Fury” for me. I immediately liked their punk attitude so… I am not a fan of ping ponging idea’s over the internet and I’m still not, but this one worked out to be a treat, great guys who very much brought the ‘psy’ aspect to it.

Johann has always been a very underrated writer, his production lets him down, but he is a super talented writer; he sent me one idea, I cut it open and then wrote new sections for “Showtime.” He loves dried coffee from Tesco, smokes all day, and generally on planet Zog by 10 pm.

Tula and Taja are the main singers in the Live show, both are great singers with very different types of voices. Tula is like a race horse with tons of ideas and enthusiasm, and easy to get great takes in a short time, lyrically and melodically. Taja has less studio experience and generally we will work around vocal ideas already written, she has a very broad range and very Juno Reactor type of voice. Only problem is they live in another galaxy, so not much access.

Yuki Masada from Japan luckily visited the studio when I was working on “Dakota” and “Voyager 303,” which she was perfect for. Eran Cohen suggested I work with Michelle Adamson who lives close to me, which was a great idea; again loads of positive energy and a brilliant way of manipulating her fav toy the Helican Voice works. Then sometimes it is just me, and I have to sing, which I try to get out of if I can.

Q: You’re world-wide recognized as one of the ‘Godfather’ of psy-trance, but I also consider you as one of the most visionary musicians when it comes to create bass lines. I’m sure you must be a real bass line freak, don’t you? What’s your vision about this speciﬁc aspect of the production?

Ben: Raja Ram is the Godfather and rightly so, along with a number of other Deities like GMS and Shpongle…

Pretty much every day that I go into the studio I’ll write 20 bass sequences, a warm up to get my brain going, then keep maybe one or two. I have a new project I want to start just for these bass lines… I don’t think I will ever get bored of synths ripping through the air in high volume and shuddering the skin off my bones.

Q: You’ve already accomplished so much great things and projects in your career. Do you still have some speciﬁc dreams, wishes, challenges and how do you see yourself evolving during the next years?

Ben: I would love to do so many more projects, in theatre, dance companies, games and movies. I am working on game music now, and really enjoying it for not having rules, and letting me ﬁnd my own orchestral sound