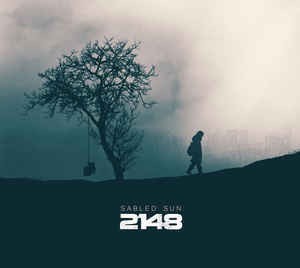 Background/Info: Sabled Sun is for sure one of the most prolific projects Simon Heath is involved with. The debut album (cf. “2145”) was released in 2012 while “2148” is already the tenth full length for the Cryo Chamber label owner.

It also is the fourth opus from the so-called “21xx series” dealing ‘about a man in hibernation waking up to a world in ruins’ who’s now taking us through the fourth year 2148!

Content: “2148” reveals a more sophisticated and complex songwriting compared to previous releases in the series and even the global work of Sabled Sun. It not only is a dark-ambient/cinematographic driven work, but also an album revealing a wider spectrum of influences.

“2148” is more elaborated than previous releases. There’s a wider spectrum of sounds mixed with many field recordings and surprising electronic sequences. I noticed some piano arrangements, and also a kind of abstract technoid sound sculptures and female samplings repeating the title from one of the tracks.

The work progressively evolves towards impressive sonic assaults and some more explicit electronic passages. The atmospheric aspect is also present, but a little bit more in the background.

+ + + : “2148” reminds me of a film in, which you have to create your own images. It definitely deals with a dark and sometimes pretty tormented subject that totally matches with the concept of the “21xx”-series. Sound-wise, I like the diversity of this work on, which Simon Heath gives me the impression to have exorcised some new sonic demons. It’s a creative work composed with numerous sounds and noise sources. “Overgrown” is the absolute masterpiece for the overwhelming vibrating sound blasts right in the beginning and the more refined piano keys support a real frightening and accomplished piece.

– – – : I can easily imagine some fans of the early Sabled Sun work will regret the soundscape format, which seems to have replaced by a more complex writing style.

Conclusion: I’m always a bit skeptical with some ultra prolific bands, but Sabled Sun took me by surprise releasing its most accomplished and best work to date!