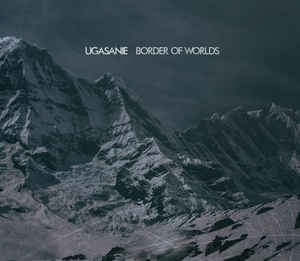 Background/Info: Belarus musician Pavel Malyshkin has released an impressive number of productions since 2011. I got the opportunity to discover previous albums released on Cryo Chamber, which each time again deal with a strong visual ambient sound based around a concept. “Border Of Worlds” is not that different dealing with tribes from the North and the Tundra, but more specifically about their belief.

Content: The sound of Ugasanie is an invitation to walk through dark humming sound waves where you can directly feel a nearby disaster. The deep, vibrating sound blasts feel like they are emerging from the deepest depths of the world. It creates a strong visual feeling and quickly appears to be a kind of ghost music. It also matches with ‘polar-ambient’, which is a definition of sound from Cryo Chamber.

“Border Of Worlds” takes you away to a world of obscure fiction created by the simple power of deep, resonating electronics and field recordings. Ugasanie has this power to create pure horror noises sometimes accentuated by fragmented voices lost in endless black corridors without an exit.

+ + + : “Border Of Worlds” confirms the potential revealed on previous albums, but I especially like this band for holding onto a real high qualitative level. Ugasanie has conceived a unique sound based on low resonating sounds where one simple note is enough to get you scared. This work features 10 tracks that will catch your attention from start till finish.

– – – : I rather see this album as a confirmation of Ugasanie’s potential and especially writing skills to compose a solid dark-ambient and cinematographic work. There’s no real innovation and the initial effect of surprise is gone. That’s maybe why a few cuts sound a bit repetitive and can’t totally convince me.

Conclusion: Ugasanie stands for cold sweat and goosebumps, which are the symptoms when being exposed to “Border Of Worlds”. That’s just the trademark of all good dark-ambient formations!

Best songs: “Way Of Amanita”, “Initiation”, “Over The Tundra”.

Since you’re here … … we have a small favour to ask. More people are reading Side-Line Magazine than ever but advertising revenues across the media are falling fast. And unlike many news organisations, we haven’t put up a paywall – we want to keep our journalism as open as we can. So you can see why we need to ask for your help. Side-Line’s independent journalism takes a lot of time, money and hard work to produce. But we do it because we want to push the artists we like and who are equally fighting to survive. If everyone who reads our reporting, who likes it, helps fund it, our future would be much more secure. For as little as 5 US$, you can support Side-Line Magazine – and it only takes a minute. Thank you. The donations are safely powered by Paypal.
Tags: Ugasanie