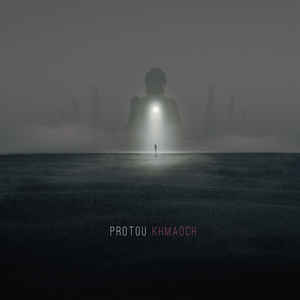 Background/Info: Sasha Cats aka ProtoU was revealed in 2015 releasing an album together with her partner Dronny Darko (cf. “Earth Songs”). Both artists are based in Kiev (Ukraine) and seem to be inspired and prolific. ProtoU last year released her debut full length (cf. “Lost Here”) while “Khmaoch” was unleashed at the end of 2016. ProtoU claims to explore Eastern esoteric traditions and old civilization.

Content: When albums have been released in a rather short lapse of time it’s normal to make comparisons. The style and influences running through “Khmaoch” aren’t that different from the debut album. It remains an ambient experience accomplished with some field recordings and mixing dark passages with more evasive fields. The dark-ambient input however became denser and more mystical as well.

“Khmaoch” makes me think to a kind of ritual meditation on, which anguishing sound vibes take the listener away to a secret world of inhibited fantasies. This sensation is only reinforced by the sudden playing of a flute. Some of the sounds are a bit astral-like, which reinforce the evasive element. It however always remains an obscure exploration of sounds and aquatic noises. A few electronic sequences can be heard as well.

+ + + : I liked the debut album for featuring a more diversified ambient work, like an imaginary sonic bridge between darkness and more dreamy sound fields. “Khmaoch” definitely stands for the darker side of ProtoU, which is for sure more stereotypical although more poignant. This is exactly how dark-ambient music has to sound and the extra mystical elements only increase the visual strength.

– – – : I don’t see it as a reproach, but ProtoU in a way became more ‘classical’-like by embracing only dark-ambient influences reducing the ‘softer’ and less darker passages of “Lost Here”. I think it really was the main characteristic of her debut.

Conclusion: “Khmaoch” is an exciting opus revealing an accentuated obscurity in sound resulting in a few cool cuts. There for sure is a noticeable evolution in the global production process.