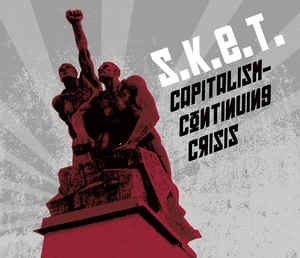 Background/Info: It took 8 years to S.K.E.T. to accomplish their fourth full length album. The German project never disappeared from the industrial radar, but except live performances the fans had to wait quite a long time to welcome this new opus.

Content: This new work sounds more sophisticated than any previous production. S.K.E.T. remains a kind of industrial ogre, but the industrial basis and sometimes power-noise approach has been mixed with elements like techno, broken beats, classical industrial noises and transcendental passages.

This work is more complex than before and I think to might confirm that S.K.E.T. has reinvented –or at least seriously reworked, their sound.

+ + + : “Capitalism-Continuing Crisis” is hard industrial work dealing with political/social themes. It first of all reveals a band that has evolved in sound and especially in their influences. The tracks are more sophisticated and even complex. But in the end it all remains hard and dynamic while carried by dense sound layers. From breakbeats to frenetic rhythms this album is filled from start till the end by merciless cadences. You sometimes get into trance while other passages are supported by dark atmospheres. I like this diversity and complementarily between all the influences. This work is refreshing industrial composition

– – – : The complexity of some tracks might be less accessible than the ‘earlier’ work of S.K.E.T. So in the end you might be patient and listen a few times to the album before really getting into it.

Conclusion: S.K.E.T. strikes back with great sound intelligence and overwhelming power. This album definitely is their strongest and especially most accomplished and classy work to date!

Since you’re here … … we have a small favour to ask. More people are reading Side-Line Magazine than ever but advertising revenues across the media are falling fast. And unlike many news organisations, we haven’t put up a paywall – we want to keep our journalism as open as we can. So you can see why we need to ask for your help. Side-Line’s independent journalism takes a lot of time, money and hard work to produce. But we do it because we want to push the artists we like and who are equally fighting to survive. If everyone who reads our reporting, who likes it, helps fund it, our future would be much more secure. For as little as 5 US$, you can support Side-Line Magazine – and it only takes a minute. Thank you. The donations are safely powered by Paypal.
Tags: Ogre, S.K.E.T.