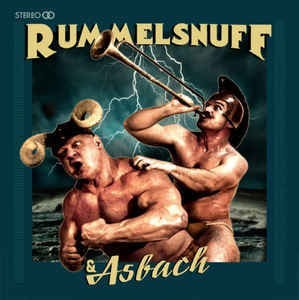 Background/Info: Ancient bodybuilder and ‘Captain’ of the crew aka Rummelsnuff joined hands with tenor baritone Asbach to create what they call ‘derbe Strommusik’ (translated ‘rough electric music’). The regular album features 14 songs while there also is a limited edition featuring an extra disc.

Content: Rummelsnuff remains one of the weirdest and yet kindest projects of this scene. I honestly never totally understood how an artist mainly dealing with a kind of ‘German folk’ and other ‘sailor songs’ could ever seduce underground music lovers. I guess the main reason is that Rummelsnuff is a great entertainer and simply the single artist in a music style, which is impossible to qualify, but catching the attention of EBM lovers.

This new opus doesn’t sound that different. With some imagination you can imagine this kind of music being played during the ‘Bierfesten’ or when watching the parade of a fanfare. You’ll also notice a more cinematographic style running through other cuts and a kind of body-pop approach later on.

Both singers are singing in German and even if you don’t understand German you clearly will feel the funny and crazy approach of the artists.

+ + + : Rummelsnuff never stops to take his fans by surprise. This guy is totally crazy, but you can feel he really enjoy what he’s doing and that’s something he masterly transposed into his music. “Rummelsnuff & Asbach” is an album that will make you smile and get you happy. Musically I clearly have a preference for the more electro-driven and pop-like songs.

– – – : You really need a good sense of humor to appreciate this kind of music, which clearly has less in common with the real electro-underground music. I can’t get away from the feeling that this artist is mainly recognized and praised in his homeland.

Conclusion: Rummelsnuff clearly remains the only ‘clown’ of the electro-underground scene. He’s laughing and joking, but most important he’s making people happy!