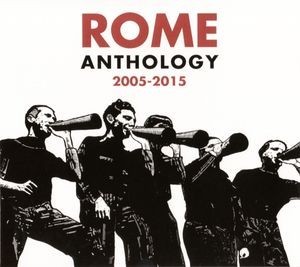 Content: Rome for sure became one of Trisol’s leading formations. The music project set up and driven by the creative mind of Jérôme Reuter this year celebrates its 10th anniversary. That’s a real good reason to look back at the artist prolific discography to release this kind of ‘best of’ album featuring 20 songs.

Rome has always been a sonic enigma to me. The early years of the band (back in time signed to Cold Meat Industry) mainly revealed a mix of neo-folk, martial and industrial influences although there already was a more intimate kind of chanson approach. Reuter calls it ‘chanson noir’. This is the kind of style he mainly elaborated throughout the last years. The least I can say is that this musician native from Luxembourg doesn’t really belong to an established music genre, but simply sounds like the sonic exorcism of multiple influences.

“Anthology” is an interesting way to analyze the evolution from the artist all over the years. Getting back to his debut album “Nera”, you’ll hear the song “A La Faveur De La Nuit” revealing a somewhat martial approach. If you take a great cut like “Querkraft”, which was originally released at “Confessions D’Un Voleur D’Ames” (2007) you already can see the evolution towards a sound becoming more ballad and country-like and, which will remind to Johnny Cash.

“The Accidents Of Gesture” taken from “Flowers From Exile” (2009) confirms the ballad and chanson-style, which is now more reminding me of Nick Cave. The guitar definitely remains the main instrument of Rome, but it’s interesting to see the evolution of the composition. One of the most recent songs like “One Fire” which was originally released at the album “A Passage To Rhodesia” reveals an accentuation of the ‘chanson noir’ format, which now became pretty intimate and the kind of music leading the listener into a kind of dark reverie.

I’ve taken these 4 songs to show the progression of Rome. This evolution happened quite progressively, but in the end I would say that the accentuation of some influences have been the main –and probably real evolution in sound.

Another important evolution concerns the production of the vocals. Jérôme Reuter seriously improved his global skills of singing and that’s maybe why he finally accentuated the ballad and chanson style of his work. “A Legacy Of Unrest” is definitely one of the most brilliant songs of this work. It sound simple, somewhat melancholic and progressively growing towards a truly apotheosis. I regret the absence of a song like “Hate Us And See If We Mind”, which is one of Rome’s best songs in the genre, but in the end it’s all about taste, which remains a subjective subject.

The songs are not only taken from the different albums, but also from a few EP’s and even a 10” vinyl. The song “The Orchards” that was originally released on the “Berlin”-EP is one of these songs. It once more reveals the wider arsenal of influences explored by Rome, which on this song mixes dreamy passages with industrial elements.

A last and important element of Rome is the lyrical commitment of Reuter who explored many themes and historical subjects like anarchistic rebels, the fight for freedom of the Rhodesian people, the French resistance during WWII etc. Other songs were inspired by poets and famous writers. If you really want to know a bit more about the inspiration behind this project I can only but strongly recommend to put your finger on the deeply artistic “A Passage To Rhodesia”-box, which was released in 2014 and which features a superb DVD documentary about this great artist.

Last, but not least, Rome will also celebrate this 10th anniversary with an important tour all over Europe.

Conclusion: 20 songs for an anthology covering 10 years of music is not a small thing! When you consider the impressive discography of Rome I think it definitely is an interesting tracklist showing the multiple influences and evolution of the band.