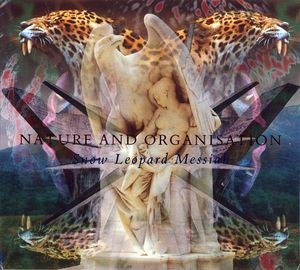 Content: Trisol takes us back in time, re-releasing 2 full length albums of Nature And Organisation. This project set up by British artist Michael Cashmore didn’t gain a similar recognition as other projects he was involved in although it has been a familiar and recognized formation for all neo-folk lovers.

Cashmore got involved in Current 93 (together with David Tibet) while he later on worked together with Marc Almond and Antony & The Johnsons. This artistic digipak features the albums “Beauty Reaps The Blood Of Solitude” originally released in 1994 and “Death In A Snow Leopard Winter” (1998).

Let’s start with the first album “Beauty Reaps The Blood Of Solitude” featuring the original tracklist of 11 songs plus 2 bonus tracks. This is an essential release for its musical eclecticism and the contribution of famous artists like David Tibet (Current 93, Psychic TV), Douglas P (Death In June), Rose McDowall (Strawberry Switchbalde) and a few more contributors. The involvement of different artists probably resulted in this quite diversified opus, which moves from pure soundtrack compositions to neo-folk passages to experimental- and industrial music to a kind of poignant chanson exposure. This album sometimes reminds me of Rome (one of the Trisol flagholders) for its artistic diversity mixing similar styles and building a sonic bridge between neo-folk, industrial and real ‘chanson’, but there also is a kind of fascination for Jacques Brel. This legendary artist has been recognized as one of Rome’s main sources of inspiration while Michael Cashmore made a personal adaptation of Jacques Brel (“To You”, which is one of the bonus tracks).

Nature And Organisation also revealed a meaningful and sensitive artistic creation, which has been accomplished with the playing of several different acoustic instruments like guitar, mandolin, flute, cello, bassoon and the violin. There’s a beautiful symbiosis between these instruments and the experimental touch.

The diversity of the work is also noticeable in the production of the vocals. David Tibet, Douglas P and the angelic timbre of voice of Rose McDowall plus Cashmore himself have sung on this album.

This work is an opportunity to (re)discover beautiful songs like “Tears For An Eastern Girl” revealing one of the most intimate parts of the work, but also the harder and more into industrial-sounding “Obsession Flowers As Torture” and melancholic-ballad sounding “Bonewithglory”. These songs once more reflect the diversity of the work.

Both bonus cuts are essential pieces as well. “A Dozen Winters Of Loneliness” is another poignant ballad-minded song revealing influences of neo-folk and even some pop approach while “To You” simply sounds like beautiful melancholia.

“Death In A Snow Leopard Winter” features the 12 original and untitled songs. This album seems to have been never fully finished and yet it was released. That’s rather strange, but the least I can say is that the result is simply remarkable although quite different from the other disc.

Cashmore again worked with several guest artists adding violin, viola and cello parts. The work is instrumental and leads the listener on a magic cinematographic voyage. This is the kind of work appealing for a visual performance on which you can simply dream away. It’s a beautiful work with a strong neo-classic approach (because of the instruments) creating a compact entity where every single composition appears to be a little piece of a great work. That’s maybe the reason why the songs remain untitled as none sounds more important than another. It also is quite difficult to give you favorite cuts because it’s the kind of work you’ve to listen to as a real entity. It makes me think about a real classical composition, on which each passage is essential.

Conclusion: This is a real interesting work, which totally fits to the Trisol roster, and is an opportunity to rediscover a somewhat forgotten artist.

Best songs: “Tears For An Eastern Girl”, “Blood Of solitude 1”, “Obsession Flowers As Torture”, “A Dozen Winters Of Loneliness”, “To You”.