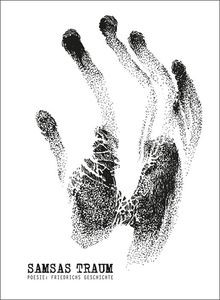 Content: Samsas Traum is one of those German bands that has gained a serious reputation and recognition in their homeland while remaining rather unknown outside. One of the main reasons for sure is the German language, which is not always easy to export. But on the other side the German scene stands for such a great and faithful audience that an international recognition is not always necessary.

This new opus by Samsas Traum deals about an interesting although dramatic concept. Mastermind Alexander Kaschte deals about a lad called Friedrich who lived during the NAZI regime. He exorcised his emotions into poetry while outside people experienced him as somewhat bizarre. He got labeled as schizophrenic and was finally deported to one of the NAZI extermination camps where mentally ill people got killed in a so-called euthanasia-plan.

It’s an interesting concept, which would be a great idea for a movie as well, but which has been transposed into a gothic & metal minded sonic exposure. The album remains pretty faithful to the sound of the band, which is mixing multiple influences. It’s just a pity non-German speaking people can’t understand what it’s all about. The booklet features all the lyrics (in German), which is an interesting help to discover this opus.

The debut is quite interesting. After an instrumental intro with clearly metal riffs and epic arrangements, “Sauber” reveals a somewhat hiphop inspired way of singing. Musically the guitar riffs remain pretty metal-like. The guitar injects the power to the work of Samsas Traum while the gothic influence is more to find in the global sound atmospheres and refined piano sounding arrangements. The main characteristic remains the duality between heavy- and more sensitive passages. The different guitar solo passages illustrate the metal inspiration, which is empowered by heavy epic treatments. “Gorgass” is a remarkable song in the genre and is one of the heaviest cuts.

Next to the harder side of the work other songs are more accentuating the refinement and even a dreamy element. “Leiche 10 000” is a well-crafted composition, which will let you discover all the delicacy of the work. The main part of the album however remains carried by furious passages and I here especially want to tip “Es Tut Uns Leid”.

This album has been released as a double disc. It’s a collector’s box featuring an impressive booklet and an extra disc with instrumental adaptations of the 1st disc.

Conclusion: I like the tragic concept behind this work, but I would encourage the band to catch the attention of non-German music lovers by adding an English translation of the lyrics for example.