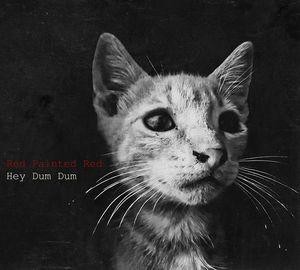 Content: Red Painted Red is back on track having accomplished their new full length album. This duo from Manchester (UK) has been always a bit like a sonic enigma as their work is hard to define.
That’s for sure the main strength of Yew and Simon Carroll, but on the other side, probably the main reason why they don’t really break through. “Hey Dum Dum” doesn’t clearly appeal to a wider audience although you rapidly will feel their love for quiet and evasive music.

The front cover of this cool digipak features a cat. That’s rather cute, but the point is that this little cat looks so sad… like having survived a terrible experience in life. I think this cover is quite symbolic for the sound, which is filled with reverie and sadness. The lyrics will not exactly make you happy. It all feels desperate and about desolation, but these kinds of feelings often appear to be a real help to compose great songs.

The half sung – half spoken and often whispering production of the vocals only accentuates the global content of the lyrics. It sounds a bit like there’s a ghost hanging over this work while at the same time it also reflects a real fragility. The sound is dark and minimal while often moving into a kind of cinematographic approach. A few more elements like gothic, (trip)-pop and even vague neo-classic ingredients can be noticed as well. The fine arrangements of guitar playing and electronic treatments are essential elements, which I especially like on “Late November”. One of the most accomplished songs “I’m No Johnny Cash” reveals cool electronic and somewhat space bleeps at one side and a neo-classic touch on the other side.

It’s not always easy to catch the music of Red Painted Red although there’s an intriguing element deep inside. The last tracks reveal some moody trip-pop influences, but the global atmosphere remains dark and desolate.

Conclusion: “Hey Dum Dum” reflects the darker side of the mind, which has been adapted into an evasive musical field.