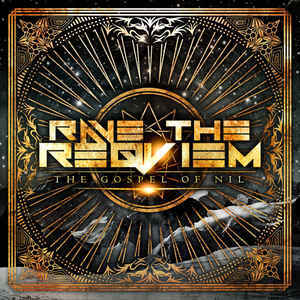 Background/Info: Swedish electro/industrial-metal formation Rave The Reqviem recently released an impressive EP “Mono Heart” as a teaser to their second full length. One of the main particularities of the band remains the line-up featuring creative mind ‘The Prophet’ (aka Filip Lönnqvist) and soprano singer ‘The Holy Mother’ (who is the mother of Lönnqvist).

Content: After an epic-sounding intro Rave The Reqviem directly reveals the main substances of their work. The sound is a perfect offspring between metal-driven guitar parts and dark-electronic sounds. The heavenly and charismatic vocals of The Holy Mother adds an artistic and graceful touch to the work.

The songs are driven by furious guitar playing while totally accomplished by the electronic layers. The album is fast and powerful, but also melodic and features refined arrangements. It’s pure crossover featuring some extra epic and even doom elements.

+ + + : “The Gospel Of Nil” has been accomplished with a right balance between metal- and electronic music, both genres being complementary. The cement between these influences maybe is the alluring vocalist, which is not only adding a transcendental touch to the album, but still a powerful exposure. There where you think that this is pure metal you’ll always find a more electro-driven input getting some equilibrium.

The EP-song remains one of the most solid exposures of this album, but I also have to mention “Eschaton” and “The Primary Fvuel”. This work sounds merciless and achieved with an impressive maturity.

– – – : Rave The Reqviem is sometimes sitting in between two chairs. Even if they’ve found the secret formula to create a perfect osmosis between electronics and metal-music they’re probably too metal-minded for electro heads and maybe not enough metal-driven for purists.

Conclusion: “The Gospel Of Nil” confirms the growing status of this formation, which hasn’t reinvented crossover, but clearly avoids easy clichés. Rave The Reqviem rocks and I can imagine their sound transposed into overwhelming live shows.