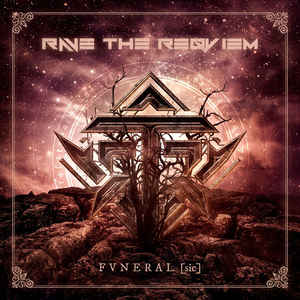 Background/Info: Set up in 2011 by Filip Lönnqvist (aka ‘The Prophet’) Rave The Reqviem originally started as a dark-electronic formation. The band signed to DWA and released its first productions. The previous album “The Gospel Of Nil” (2016) saw the band dealing with a more metal-driven sound. The band now joined hands with Out Of Line to unleash their third opus. One major change happened in the line-up. Filip’s mother (aka ‘The Holy Mother’) who was the lead  singer left the band and got replaced by Jenny Fagerstrandh (aka ‘The Seraph’).

Content: This album moves on there where “The Gospel Of Nil” ended. It’s a furious production carried by heavy, aggressive and pure metal-sounding guitar playing while electronic arrangements inject an epic touch to the work. The rhythms are furious and sometimes pretty hard-core like. The new female vocalist seems to feel perfectly comfortable and brings a heavenly and artistic touch to the album. There’re still multiple male vocal parts as well.

+ + + : This album stands for the ultimate fusion between metal- and industrial/electro music. Both genres are totally complementary, which is an essential element of this work you also will find back in the female- (leading) and male (backing) vocals. This work stands for power and harmony! The epic touch supporting the opus is also characteristic and accentuating a kind of drama. There’s multiple noticeable songs featured here and even potential hits. That’s also because of the fully accomplished and elevating choruses.

– – – : Rave The Reqviem hasn’t reinvented the industrial-metal style and that’s probably the single remark I can imagine about this album.

Conclusion: I personally consider Rave The Reqviem as one of the most promising bands in their genre. They’re constantly improving their sound and global production, which resulted in a brilliant opus! This band has the potential to become one of Out Of Line’s leading formations.