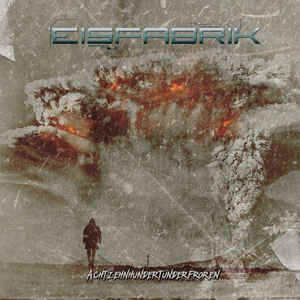 Content: The sound formula of Eisfabrik hasn’t changed and once again mixes elements of dark-electro and future-pop. Sound-wise I would swear to have heard a new project of Gerrit Thomas (Funker Vogt) while some vocal parts remind me of Ronan Harris (VNV Nation). Eisfabrik composes a mix between hard electronics and a more melodic side empowered by alluring vocals.

They have this strange fascination for ‘ice’, ‘frost’ and ‘cold’, but the music will push you to dance and to get warm. There are multiple outstanding pieces, which have been accomplished by solid rhythms, little, icy bleeps, carrying leads and charismatic vocals.

+ + + : Eisfabrik doesn’t reinvent any electro-underground style, but has found a secret recipe to mix Funker Vogt together with VNV Nation. In the end it’s just Eisfabrik! I was impressed by the songwriting built up with numerous noticeable sounds and a nearly constant danceable cadence. The vocals by Dr. Schnee add a powerful and somewhat pop-minded touch to the composition. The debut part is absolutely sensational revealing multiple potential hits and the noticeable “Hell Is Made Of Ice” revealing a kind of visionary acid-pop sound.

– – – : There’s no real evolution compared to their previous work, but it here consists of a rather ‘new’ band so there’s no real reason to complain. I just regret a few softer cuts, which are cool, but are not an added value.

Conclusion: After their previous great opus I was rather wondering how this new work of Eisfabrik would sound like and the least I can say is that I haven’t been disappointed. The ‘icemen’ from Hannover simply confirms to be one of the ‘hottest’ electro formations of the past 2-3 years.

Best songs: “Hell Is Made Of Ice”, “A Murdered Love”, “Sensations Of Pain”, “Millenium Find”, “The Coldest Summer”.