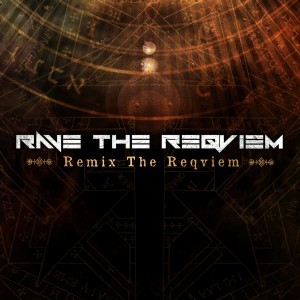 Content: Set up by Cynical Existence member Filip Lönnqvist, Rave The Reqviem last year released their self-titled debut album, which seems to have been a rather successful release. I’m not that surprised as the album reveals an interesting mix of electronics and pure metal influences. It’s not that new, but always a cool alternative to the typical dark-electro standards.

The album has been now re-released featuring an extra disc filled with remixes. These remixes are available on digital format with some extra bonus remixes on top. It became a quite familiar formula at DWA to re-release the original full length with an extra disc full of remixes. It also is an opportunity to rediscover the original songs a different way while the list of artists that have been asked for a remix is often impressive while featuring many previously unreleased remixes.

“Remix The Reqviem” reveals an interesting selection of label mates like Ruinizer, Nitro/Noise, vProjekt next to established names like Grendel; iVardensphere, Faderhead ao. And there once more are some real noticeable remixes revealing different influences. I even have to say that this is probably one of the best albums in this ‘remix’-concept. I can’t say that there are real hits among it although the quality level of the remixes is consistant and really high.

I’ll recommend Ruinizer for their hard electronic and epic remix of “Thistleblower”, which is for sure one of the main songs. Another label mate, Nitro/Noise did a great job as well remixing

“Schizophrenia In Reverse” in a quite smashing electro-metal way. “The Svlphvry Void” was reworked by Faderhead into a totally different approach, which accentuates the electronic manipulations of this electro-body-pop artist. One greater remix is the intelligent approach by ΔAimon on “Ikaros”.

As I already said there’s a lot to experience on “Remix The Reqviem”. I also have to mention the powerful remix of “Thristleblower” by Grendel, which put a techno-minded kick on it.
Animal Tag is for sure one of the less familiar names among the remixes, but their remix of “Aeon” is quite an interesting one. It reminds me a bit of the anarchistic hard-core sound of Ultraviolence. This remix brings something totally different, which can also be said for iVardensphere and their remix of “Is Apollo Still Alive?”.

Conclusion: This is a fascinating way to rediscover the album “Rave the Reqviem” through the eyes and the musical brain of other bands. This album is fully complementary to the original work.