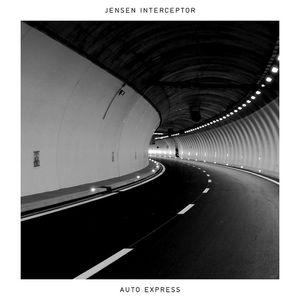 Jensen Interceptor has now joined David Carretta’s label Space Factory to unleash this great piece of music, which is mixes elements of techno music and vintage EBM. This is a production that will appeal to the nostalgic fans of great vintage electronics. This EP features 5 songs opening with the title cut, which merges minimal EBM and electroclash with an ultimate degree of perfection. The production is characterized by deep sounding bass lines and icy, technoid arrangements. The song is interrupted by a terrific although typical trance-like break. There are no real vocal lines, but just a few spoken male and female words, which are more like samplings.

The title song is fully representative for the rest of the EP. The production is carried by impressive sound treatments, which will appeal to lovers of dark techno music and EBM. But “Auto Express” clearly doesn’t sound like an average techno production. It’s much darker and elaborate, both elements emerge at the surface on the tracks, “E40” and Xternal”. It sometimes sounds a bit spooky, but always driven by great danceable vibes and this kind of irresistible retro-electro style.

Notice by the way that the song “Unleaded 98” features another Australian project in the genre called Mikron. In the meantime Space Factory has released another EP from Jensen Interceptor, which I hope we’ll soon discover as well.

Conclusion: This is a brilliant composition for lovers of good-old minimal-EBM and electroclash. This EP is not moving into the remix-trend, but simply brings you 5 smashing cuts.

Since you’re here … … we have a small favour to ask. More people are reading Side-Line Magazine than ever but advertising revenues across the media are falling fast. And unlike many news organisations, we haven’t put up a paywall – we want to keep our journalism as open as we can. So you can see why we need to ask for your help. Side-Line’s independent journalism takes a lot of time, money and hard work to produce. But we do it because we want to push the artists we like and who are equally fighting to survive. If everyone who reads our reporting, who likes it, helps fund it, our future would be much more secure. For as little as 5 US$, you can support Side-Line Magazine – and it only takes a minute. Thank you. The donations are safely powered by Paypal.
Tags: Jensen Interceptor