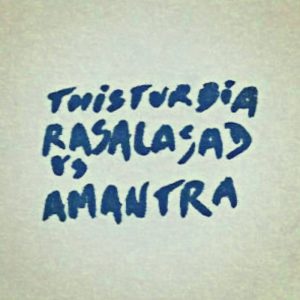 Background/Info: “Thisturbia” is a next release featuring Fernando Cerqueira aka Rasalasad working with another formation. Amantra is a French project driven by Thierry Arnal. He released some work on Avalanche Records and Terranean Recordings.

Content: The work takes off with heavy, ambient blasts joined by dark noises. Quite progressively both artists are experimenting with different influences moving from cinematographic and somewhat psychedelic-like passages towards heavy, resonating drones.

+ + + : “Thisturbia” is an overwhelming production covering different sources of inspiration. I was mainly impressed by the global sound production, which comes mainly through in the crushing ambient parts and heavy drones. “Peak” is an absolute masterpiece.

– – – : Rasalasad is not exactly a formation that can be labeled as one established style. That’s maybe a problem when you have to define the work of this project.

Conclusion: “Thisturbia” is a fully successful collaboration covering a wide arsenal of influences and music styles. Both artists definitely have to renew this experiment.