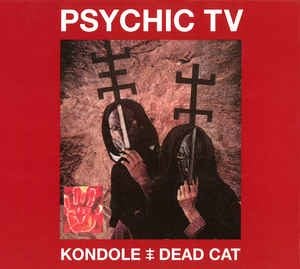 Background/Info: Cold Spring Records takes us back in time to re-discover a unique documentary consisting of the “Dead Cat”-movie originally released in 1989, but shown only at a handful of cinemas. The movie was written and directed by David Lewis while Psychic TV composed the music for this film. Genesis P-Orridge has been featured in this film as well.

Content: Let’s start with the DVD featuring the “Dead Cat”-movie. It’s a short film in black & white and which, will without a shadow of a doubt even nearly 30 years after its creation take the audience by surprise. It has something shocking, into provocation, and is totally surreal. I can imagine it’s the kind of movie that will appeal for lovers of Luis Buñuel, but the global sphere is darker and more shocking.

The music composed by Psychic TV totally matches with the movie. Repetitive electronic loops and industrial noises are getting the listener in their grip to progressively move towards an even more tormented approach featuring a diversified canvas of noises, sound crashes, screams and percussion sounds.

The second CD features 3 tracks. The opening song was originally released in 1988 and is still a soundtrack for a film called “Kondole (Thee Whale)”. We next get a cut from 1993, which sounds a bit in the line of “Thee Whale” and a last track, which is a short version (and the soundtrack to the film of David Lewis) of “Dead Cat”. The common elements between all cuts remain the abstract-, industrial- and experimental approach, which remains that unique and typically Psychic TV-like.

+ + + : This is the kind of release, which will definitely appeal for all lovers of Psychic TV. Next to the music you get this particular and tormented film. It’s an interesting release as images and music together became one. The work is dominated by a weird and anguished atmospheres, which remain typical for Psychic TV.

I especially like “Thee Whale” featured at the second disc for its tribal percussion parts mixed with abstract electro-industrial music and the whale noises. There also is a great didgeridoo passage running through “Dead Cat”.

– – – : “Dead Cat” is a track that will get you in its grip for 48 minutes. There’s not a lot of variation running through the composition and that’s why I definitely prefer the shorter version.

Conclusion: Psychic TV remains one of the most unique bands from the 80s driven by a real phenomenal artist. It brings us back to a decade where artists were creative and composed music without barriers and no compromises. That’s why this album is an important release as a testimony from the industrial music legacy!