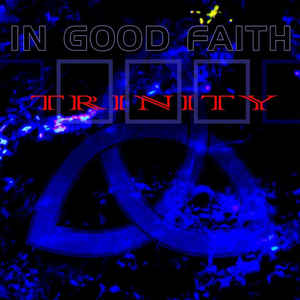 Background/Info: In Good Faith was set up 20 years ago. The German band deals with electro-pop music and has joined hands together with Echozone after multiple self-released productions. “Trinity” has been positively received in their homeland, reaching the highest regions of the DAC (Deutsche Alternative Charts).

Content: The sound makes me think to an imaginary offspring between Days Of Fate (for the body-pop approach) and De/Vision for the more melancholic tunes. The songs have been perfectly worked out and driven by the charismatic vocals of their singer. The last part of the album reveals a remix by Terrolokaust and a cover version of Joy Division’s legendary “Love Will Tear Us Apart”.

+ + + : A good electro-pop band needs a great singer and that’s exactly what you can say about Kai Vincenz Németh. This guy sings with a natural charisma and definitely is one of the main strengths of In Good Faith. But the music is pretty well-crafted as well. There’s an interesting move in between traditional electro-pop songs, more melancholic wave-pop cuts and harder body-pop passages. The arrangements reflect a mature production process. I also have to mention the noticeable cover version of “Love Will Tear Us Apart”, which sounds a bit like it has been written by In Good Faith. They perfectly transposed the original song into their own sound approach.

– – – : I got the feeling this band is able to even do better than what they’ve shown here. Some choruses could be a little bit more transcendental although I’ve no reason to complain. The remix of Terrolokaust is not exactly adding an extra.

Conclusion: In Good Faith seems to be already ‘renowned’ in their homeland, but it definitely remains a band, which now has to go on mission for an international break through. I should say, why not!

Since you’re here … … we have a small favour to ask. More people are reading Side-Line Magazine than ever but advertising revenues across the media are falling fast. And unlike many news organisations, we haven’t put up a paywall – we want to keep our journalism as open as we can. So you can see why we need to ask for your help. Side-Line’s independent journalism takes a lot of time, money and hard work to produce. But we do it because we want to push the artists we like and who are equally fighting to survive. If everyone who reads our reporting, who likes it, helps fund it, our future would be much more secure. For as little as 5 US$, you can support Side-Line Magazine – and it only takes a minute. Thank you. The donations are safely powered by Paypal.
Tags: De/Vision, In Good Faith, Terrolokaust