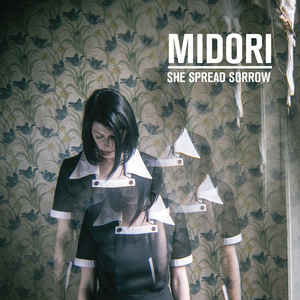 Background/Info: Alice Kundalini is back on track unleashing the third full length from her sonic project She Spread Sorrow.

Content: “Midori” is meant as an escape from a harsh reality that becomes an echo of nightmares and visions. That’s an interesting ‘concept”, which has been transposed and adapted into a spooky industrial work carried by the half spoken, whispering vocals of Alice Kundalini. Her way of performing the vocals is not only ghost-like, but also sensual. It creates a contrast with the industrial crashes and other oppressive, dark atmospheres this work has been recovered with. Echoing noises are emerging from everywhere, rapidly leading the listener into a paranoiac imaginary universe. You feel like walking in an empty space while ghost trains are passing by. Some heart-beating drones in the background are like accentuating this sensation of stupor.

+ + + : One of the main strengths of this work is the strong visual content. It’s a tormenting experience accomplished with a brilliant harmony between the vocals and the harder industrial soundscape. I really think there also is something like a ‘female’ touch only women can create when composing their music. Alice Kundalini accomplished a harsh and yet delicate work filled with subtle arrangements. There’s a real cool slow progression running through the tracks, which are leading the audience towards a dangerous climax.

– – – : If I really have to imagine a minus point about this album it would be the somewhat similar character of the tracks. There are for sure some climaxes running through this opus, but maybe not the ultimate apotheosis. That’s maybe because I prefer the opening cuts instead of the last ones.

Conclusion: She Spread Sorrow has invented a very own style creating an artistic and styled industrial work. This album is without a shadow of a doubt the most accomplished one so far.