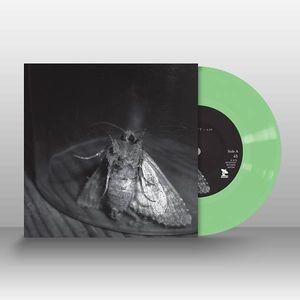 Content: This limited vinyl 7” is a meeting between a long time established and electro-pop icon and an upcoming and promising new artist.

Psyche needs no longer introduction with Darrin Huss being a kind of living legend in the electro-pop scene. Luminance is a Belgian project, which has released a couple of interesting releases since 2014. The debut album “Sans Visage” is actually out on the Belgian-based Die Blinden Records. So this is the meeting between different musical decades, but sharing the same fascination for electro-pop inspired music.

“Left Out” reminds me of good-old EBM for its typical vintage electronic style while the song is carried by a somewhat floating and elevating chorus. It totally matches with Darrin Huss’ charismatic timbre of voice.

“Passenger Seat” moves a step further in the retro-electro style. It’s a great body-pop constructed song built on mysterious sound atmospheres and driven by spooky vocals. This song reminds me of the great 80s decade of underground electronics and I can imagine it’s the kind of song Darrin Huss must have liked to sing on.

Conclusion: I can only hope both artists will have the good idea to renew their experience to create this vinyl and maybe unite for an entire album. There’s some magic inside this duo.